A report has surfaced which claimed that the Uttar Pradesh STF directed its personnel and their family members to delete 52 Chinese apps from their smartphones. 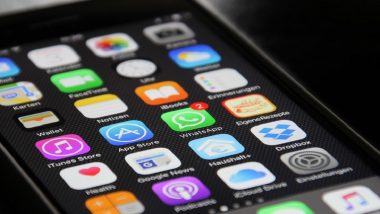 New Delhi, June 19: Amid growing anti-China sentiments in the wake of the killing of 20 Indian soldiers during a face-off with Chinese forces in Ladakh and call for a boycott of Chinese products, a report has surfaced which claimed that the Special Task Force (STF) of the Uttar Pradesh Police directed its personnel and their family members to delete 52 Chinese apps such as TikTok, We Chat, LIKE and Helo from their smartphones. The PIB Fact Check, which is fact-checking Twitter handle of the government, on Friday dismissed the report, calling it fake news. Centre Planning to Sack 5 Lakh Government Employees? PIB Fact Check Terms Newspaper Report as Fake News.

"All the personnel of the STF, Uttar Pradesh are directed to immediately remove the following android apps from their mobile phones as well as that of their family members," a news agency quoted an order purportedly issued by Inspector General (STF), Uttar Pradesh, as saying. The order further claimed that the Ministry of Home Affairs (MHA) has suggested not to use these applications as these applications are of Chinese origin and pose the threat of possible data theft. Did Rahul Gandhi Call Sushant Singh Rajput a 'Cricketer' in Condolence Tweet? Here's a Fact Check to Debunk Fake News.

The list of 52 “dubious apps” include names like Tik Tok, Vault Hide, Weibo, We Chat, Share It, UC News, UC Browser, Beauty Plus, Club Factory, Helo, LIKE, Kwai and ROMWE, etc. "This news is fake. The STF has not issued any such advisory," read a clarification issued by the PIB Fact Check in response to the report. There is widespread anger and outrage against China after the death of 20 Indian soldiers in a violent face-off with Chinese troops at patrol point 14 on Monday night in Ladakh's Galwan valley.

The India-China faceoff at the Line of Actual Control (LAC) has been going on since early May and the brutal attack came amid a de-escalation operation and disengagement talks already underway.

Uttar Pradesh STF personnel and their families have been asked to delete 52 Chinese apps.

This is fake news. No such order has been passed.

(The above story first appeared on LatestLY on Jun 19, 2020 04:20 PM IST. For more news and updates on politics, world, sports, entertainment and lifestyle, log on to our website latestly.com).