George Khanisser, ‘Miracle’ Baby Born During Beirut Blast Gives a Ray Hope to the Lebanese People With His Pics and Videos

Baby named George Khainsser, is now giving a ray of new hope to the Lebanese people in the wake of the catastrophe. An Instagram page, called ‘Miracle Baby George,’ consists of pictures and videos of the little one, who came into the world, moments after the explosion in Lebanon. 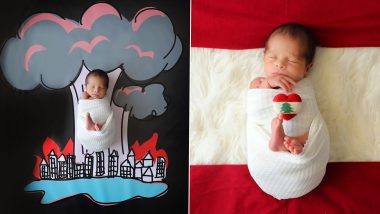 On August 4, 2020, a horrific blast in the capital of Lebanon shook the world. Beirut explosion caused many destructions, and the world is still reeling through it. Many videos and pictures have surfaced on the internet, capturing moments during and after the blast across the capital city. Among them, was a video of a mother going into labour, during the explosion and it is chilling. The baby, named George Khainsser, is now giving a ray of new hope to the Lebanese people in the wake of the catastrophe. An Instagram page, called ‘Miracle Baby George,’ consists of pictures and videos of the little one, who came into the world, moments after the explosion in Lebanon. From Rio’s Christ the Redeemer Statute to Eiffel Tower’s Lights Turned Off, Here’s How Famous Tourist Spots From Around the World Showed Their Solidarity With Lebanon Victims.

Emmanuelle Khnaisser, was being wheeled into labour inside Saint George Hospital University Medical Center, when the blast occurred. “The baby was in his final stages and doctors told us, 'We have to deliver him now. Doctors who were injured fixed each other and went on with the delivery as if nothing ever happened,” father Edmond Khnaisser, was quoted saying in Good Morning America. Lebanon Bride, Whose Wedding Photoshoot Was Interrupted by Massive Explosion in Beirut, Says 'Lucky to be Alive' After Dramatic Video Goes Viral.

The explosion levelled buildings throughout the city. Khnaisser was filming as windows shattered and debris ripped through the facility. The video capturing the moment, when the mother went into labour, display the intensity of the blast.

“Light from Darkness, Birth from Wreckage I'm Baby George, born on 4th of August 2020 during Beirut devastating explosion by heroes (sic),” reads the caption of few pictures shared on the Instagram page. One of the photos of George represents the pain Beirut has gone through, while another shows the little one, wrapped in a blanket with a heart on top that had the Lebanon flag on it. George’s birth story is shared on the Instagram account, as a symbol of hope to the people of Lebanon.

Here's Another Pic of Baby George

Khnaissers say George is their miracle baby and hence the name on the Instagram page. The first-time parents thanked all the hospital staff for their professionalism, amid a disastrous blast.

The Beirut explosion levelled buildings and caused extensive damage over much of the rest of the capital, which is home to two million people. The detonation on about 2,750 tonnes of ammonium nitrate that had been stored unsafely at a warehouse in the port is blamed for the blast. According to reports, more than 200 people were killed, and many left injured. The capital city continues to fight the aftermath destruction caused by the explosion.

(The above story first appeared on LatestLY on Aug 28, 2020 09:32 AM IST. For more news and updates on politics, world, sports, entertainment and lifestyle, log on to our website latestly.com).