Beirut Explosion: From Rio’s Christ the Redeemer Statute to Eiffel Tower’s Lights Turned Off, Here’s How Famous Tourist Spots From Around the World Showed Their Solidarity With Lebanon Victims (See Pics and Videos)

From Rio’s Christ the Redeemer Statue that light up with Lebanon flag, to Eiffel Tower switching off its light show, here is how famous tourist spots from around the world have shown their support and unity with the Lebanon victims. 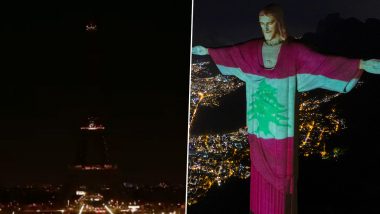 The world is reeling from the recent explosion in Beirut that killed about 137 people and injured nearly 5,000. The blast at a portside warehouse in Lebanon’s capital city sent devastating shockwaves, causing widespread destruction. After the unfortunate incident, many heart-breaking videos and images have appeared on social media showing the extent of physical damage to the city. #PrayForLebanon and #PrayForBeirut continuously trend on social media, as people around the world joined their forces praying for the victims. Similarly, iconic and famous tourists spots from across the globe have shown their solidarity with the Lebanon victims. Some lit up with the flag of Lebanon, while others turned off the lights, mourning the unfortunate incident. From Rio’s Christ the Redeemer Statue that light up with Lebanon flag, to Eiffel Tower switching off its light show, here is how famous tourist spots from around the world have shown their support and unity with the Lebanon victims. In this article, we bring you pictures and videos of famous places, honouring the victims of the Beirut explosion. Lebanese Volunteers Search and Reunite Lost Pets With Their Owners Following the Deadly Blast.

📸 Rio's Christ the Redeemer illuminated by colors of the Lebanese flag to pay tribute to victims of the devastating Beirut blast. https://t.co/YkhrPdftrn pic.twitter.com/mNQLfvbqMH

Rio’s Christ the Redeemer statue lit up with the Lebanese flag to honour victims of the Beirut blast. A ceremony was also held, where religious leaders offered prayers for the injured, those who lost their lives and those made homeless.

Dubai’s Burj Khalifa was lit up with the colours of the Lebanese flag in a gesture to show solidarity to the Lebanon victims following the explosion in the Lebanese capital.

Great Pyramid of Giza in Egypt

#Egypt's Giza pyramids were illuminated on Tuesday night with colours of #Lebanon flag in solidarity with victims of #BeirutBlast pic.twitter.com/fBiw43k9v2

The iconic pyramids in Egypt, the Great Pyramid of Giza also paid solidarity to those who lost their lives in the explosion. The pyramid lit up with the images of the Lebanese flag in a bid to express support for the people of Lebanon.

🇬🇧 To show solidarity to the people of #Beirut and #Lebanon, I will turn off my lights at midnight 🙏🇱🇧 pic.twitter.com/6WSIQA8UiJ

The iconic Eiffel Tower in Paris went dark for an hour 5 to pay tribute to the victims of the warehouse explosion. Video captured the French landmark shows the tower’s bright lights dimming at midnight on August 6, mourning the deaths of lives lost because of the blast. Lebanon Bride, Whose Wedding Photoshoot Was Interrupted by Massive Explosion in Beirut, Says 'Lucky to be Alive' After Dramatic Video Goes Viral.

The Azadi Tower, formerly known as the Shahyad Tower too projected the Lebanese flag on its structure. Photos show the country’s flag and #PrayersForBeirut and #PrayForLebanon, lit up in the towers.

Along with the above, other popular spots such as CN Tower in Canada as well showed its solidarity by lighting up the tower in the Lebanese flag. The blast, which flattened much of the city’s port is said to have been caused by seized explosives stored in a warehouse. The search and rescue operation is on, while families mourn the deaths of their near ones.

(The above story first appeared on LatestLY on Aug 07, 2020 04:59 PM IST. For more news and updates on politics, world, sports, entertainment and lifestyle, log on to our website latestly.com).