Greta Thunberg Tweets Photo of Herself Sitting on Train Floor Due to Overcrowding, German Railway Company Explains The Other Side 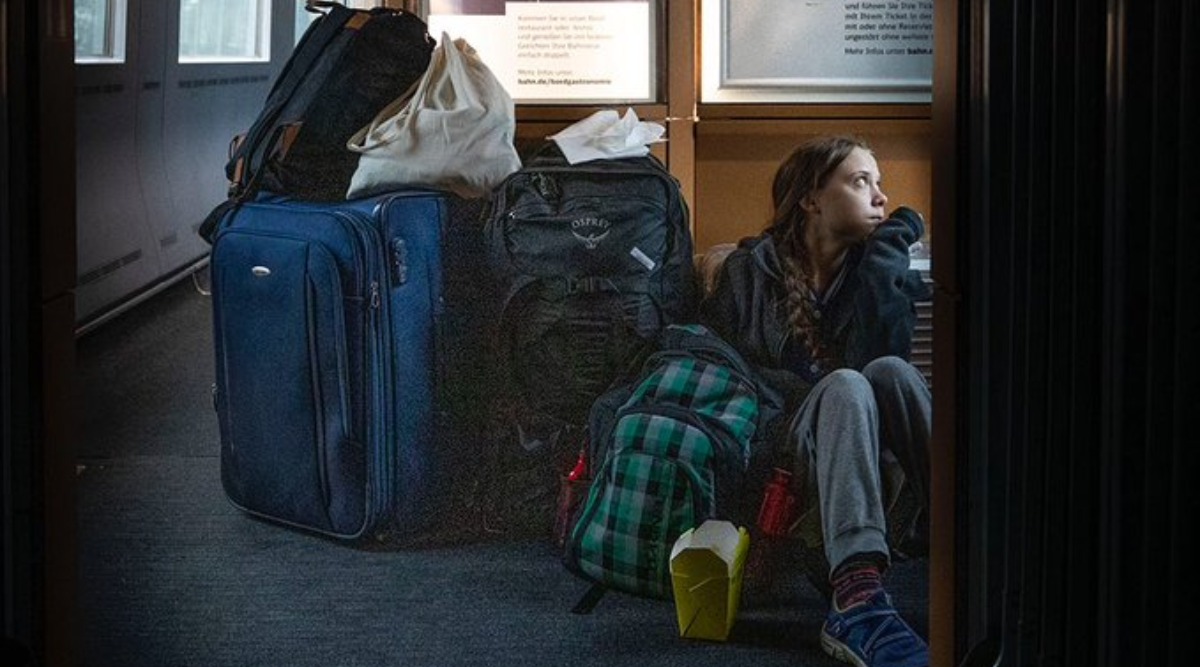 Young climate activist Greta Thunberg found herself in a controversy after she tweeted that she travelled in an overcrowded German train. Tweeting a photo of herself sitting on the floor of the carriage with big bags, she complained that the train was crowded hinting that she had to sit on the floor. However, the railway company took to Twitter narrating the entire story. It seems that Greta's tweet was not the whole story and there is more to it. Greta Thunberg is a Time Traveller, Say Netizens, After a 120-Year-Old Picture of Climate Activist's Lookalike Goes Viral (Check Tweets)

In one of the tweets, the German train company expressed pleasure in serving Greta and for supporting them in their journey in travelling green. But in the next tweet, the German train company said that they wish Greta would appreciate their service and comment on how the staff tried to make things comfortable for her. It also adds that Greta was upgraded to first class. Climate Activist Greta Thunberg Gets a Four-Storey-High Mural in San Francisco (Watch Video)

Traveling on overcrowded trains through Germany. And I’m finally on my way home! pic.twitter.com/ssfLCPsR8o

The first tweet translated from German reads, "Love #Greta, thank you for supporting us railroad workers in the fight against climate change! We were pleased that you were on the ICE 74 with us on Saturday. And with 100 percent green electricity." The second tweet reads, "It would have been even nicer if you had also reported how friendly and competent you were looked after by our team at your seat in first class. #Greta."

Here's What the Train Company Tweeted:

Meanwhile, Greta added that she was not complaining, rather showing how overcrowded trains are as more people travel by the mode than planes. She wrote, "Our train from Basel was taken out of traffic. So we sat on the floor on 2 different trains. After Göttingen I got a seat.This is no problem of course and I never said it was. Overcrowded trains is a great sign because it means the demand for train travel is high!"

Our train from Basel was taken out of traffic. So we sat on the floor on 2 different trains. After Göttingen I got a seat.This is no problem of course and I never said it was. Overcrowded trains is a great sign because it means the demand for train travel is high!

The development comes days after a Twitter clash with US President Donald Trump. After she was named TIME magazine's person of the year.Trump tweeted, "So ridiculous. Greta must work on her Anger Management problem, then go to a good old fashioned movie with a friend! Chill Greta, Chill!" The 16-year-old garnered popularity after protesting against climate change. She crossed the Atlantic twice by boat in recent months in order to speak at a UN climate summit in New York and also at the COP25 summit in Madrid.