Happy Birthday Ratan Tata: 5 Quotes by The Philanthropist That Will Leave You Inspired

It was under the leadership of Ratan Tata that Tata Motors acquired Land Rover and Tata Tea acquired Tetley. As he turns 84 today, here are some of his quotes which will motivate you. 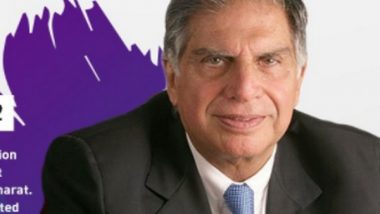 Former Chairman of Tata Group, Ratan Tata is one of the biggest names not only in India but worldwide. His business ethics and philanthropic activities are second to none. The former Chairman of Tata Group is a recipient of two of the highest civilian awards, Padma Vibhushan (2008) and Padma Bhushan (2000). Born in 1937, Tata is widely known for his valuable contribution to transforming the Tata Group. Tata Group successfully transformed itself into a Indian business with global outlook and outreach under the chairmanship of Ratan Tata. Ratan Tata Again Calls Out Fake News as Rumour Mongers Quote Him as Saying That '2020 Is Year to Survive, Not to Make Profit'

Ratan Tata is also an author and a source of inspiration to many of us. His life is no less than a school. His great grandfather was Jamsedji Tata, founder of the Tata group. It was under the leadership of Ratan Tata that Tata Motors acquired Land Rover and Tata Tea acquired Tetley. As he turns 84 today, here are some of his quotes which will motivate you.

1. “Ups and downs in life are very important to keep us going because a straight line even in an ECG means we are not alive.”

4. “I don’t believe in taking right decisions. I take decisions and then make them right.”

5. “There are many things that, if I have to relive, maybe I will do it another way. But I would not like to look back and think what I have not been able to do.”

As Ratan Tata celebrates his 84th birthday today, we wish the Indian tycoon all the luck in his future endeavours and hope he remains in the pink of health. Ratan Tata's Instagram Post Calling to Stop Hate and Bullying Wins Hearts Online, Netizens Thank 'Man With Golden Heart' For Highlighting an Important Issue

(The above story first appeared on LatestLY on Dec 28, 2021 01:50 PM IST. For more news and updates on politics, world, sports, entertainment and lifestyle, log on to our website latestly.com).