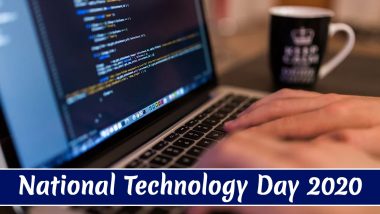 National Technology Day is observed across on May 11 in India. The day marks the anniversary of Pokhran nuclear tests  (Operation Shakti) of 1989. It also celebrates India's advancements in technologies that have contributed to the country's growth. As we celebrate National Technology 2020, people have taken to Twitter commending India's technological capabilities and other advancements in the sector. Twitterati is also posting the heights of technology that the country has reached and are praising the efforts of those involved. National Technology Day 2020 Date & Theme: Know History and Significance of the Day That Reminds Indians of the Country’s Glorious Technological Strength.

Prime Minister Narendra Modi on Thursday tweeted about the significance of the day and greeted "industrious scientists and those passionate about technology" on National Technology Day," Many other ministers, celebrities and commoners took to Twitter highlighting India's advancements in the technology sector. As we observe the day, we bring to you tweets posted by our Twitterati. National Technology Day 2020 Images and HD Wallpapers For Free Download Online: Quotes, WhatsApp Messages & Facebook Photos to Wish Everyone on This Significant Day.

All under the able leadership of Shri.Atal Bihari Vajpayee Ji.

A Proud Day For India:

India set it's own terms for the world and gave a strong message that we are not bothered & will do everything that's necessary for the rise and protection of the country.

Let's celebrate #NationalTechnologyDay as a tribute to our scientists for their numerous accomplishments and innovations that have boosted pur national growth and identity. pic.twitter.com/MHxVQL3QJ7

Greetings to fellow countrymen on #NationalTechnologyDay

On this day in 1998, India established itself as a nuclear power.

Let us honour the services of our scientific community & continue to leverage technology for our nation’s progress. pic.twitter.com/bZEPxio2Y5

(The above story first appeared on LatestLY on May 11, 2020 09:10 AM IST. For more news and updates on politics, world, sports, entertainment and lifestyle, log on to our website latestly.com).