Hasbulla Magomedov vs Abduroziq Fight Organised By MMA Star Branded 'Unethical Freak Show': All You Need To Know About This Fight

A mock-up clip of an MMA fight circulating on social media between two internet celebrities - Hasbulla Magomedov and Abduroziq - with a growth disorder, has been condemned by Russia's Dwarf Athletic Association. 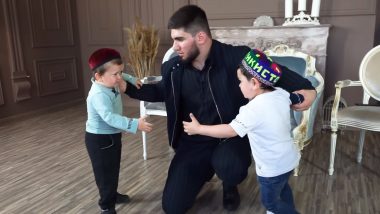 A mock-up clip of an MMA fight circulating on social media between two internet celebrities - Hasbulla Magomedov and Abduroziq - with a growth disorder, has been condemned by Russia's Dwarf Athletic Association. The video that has created quite a clamour on social media, with almost nine million hits, shows their pre-fight banter as Abduroziq threatens Hasbulla: ”If you lay even a finger on me now, they will take your corpse away."

The fight between a popular Tik Tok star from the Russian republic of Dagestan  Hasbulla 'Hasbik' Magomedov and his opponent Abduroziq,  a singer from Tajikistan, has reportedly already taken place; But a video of the fight hasn't been released since it was deemed as 'unethical.'

Why was it condemned?

Magomedov, who is 18-years-old and 3ft tall, reportedly has a growth disorder and has the attributes of a child. While Abduroziq, 17, is about 3ft 3in tall, suffers from a similar disorder. Magomedov nicknamed 'Mini Khabib,' inspired by former UFC lightweight champion Khabib Nurmagomedov is known for posting several hilarious videos of him pretending to fight children. His antics have inspired quite the fan following on Tik Tok.

The mixed martial arts fight was organised by Chechen blogger Ashab Tamaev, 19, and the teaser video titled "Khasbik vs. Abdurozik" has over 8 million views.

Not everyone was thrilled about the publicity. The video quickly invoked harsh criticism from Russia's Dwarf Athletic Association, who were angered at the exploitation of a disorder that will turn the pair into a 'laughing stock."

Uliana Podpalnaya, the head of the association, told RT Sport, "It's not even like a show fight – they get paid a lot of money, and it’s a show to make people laugh. There’s nothing serious about this, this isn’t a sport.”

(The above story first appeared on LatestLY on May 23, 2021 04:29 PM IST. For more news and updates on politics, world, sports, entertainment and lifestyle, log on to our website latestly.com).