Again those who already in self-imposed quarantine, staying home can be an occasion for great personal growth. Follow the footsteps of some great minds who have engaged in a similar practice—Sir Isaac Newton and William Shakespeare. According to the latest findings, both the geniuses remarkably utilised their time working from home, during quarantine and pandemic. 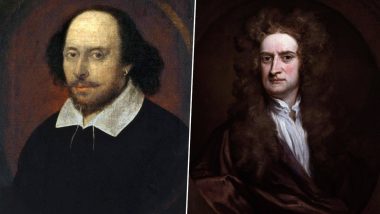 The Coronavirus outbreak has forced people to stay indoors with government implementing lockdowns in several places. Amidst the spread of COVID-19, measures are being taken to ensure people do not gather in large numbers. One of the many ways to ensure that is social distancing. Amid the coronavirus tension, epidemiologists are urging people to maintain social distance and take work from home during this global crisis. While most of us are not yet in a situation of physical isolation, we can at least prepare ourselves how we will get through a quarantine the best way. Those who are already in self-imposed quarantine can be greatly utilised for personal growth. And if you are wondering how, then let us tell you some of the greatest minds of Sir Isaac Newton and William Shakespeare did their best during the quarantine. Both the geniuses remarkably utilised their time working from home, during quarantine and pandemic. #HighRiskCovid19 Trends on Twitter: People Who Are at Higher Risk of Illness From Coronavirus Share the Importance of Social Distancing.

The idea of self-isolating oneself from all is not new. Avoiding the most critical of tasks so to not get infected during pandemic seems to have been there in the past. Gillian Brockell, writer at The Washington Post explored the period in 1665, during the Great Plague of London, a major and last epidemic of the bubonic plague to occur in England. It killed about 100,000 people. Sir Isaac Newton was a student back then at Cambridge University. He returned to his family’s home in Cambridge, where he utilised long stretches of work alone on various questions that had been on his mind. He had a breakthrough regarding the nature of motion and gravity. Yes, the concept, according to Brockell, originated during the pandemic in London. Not just that, Newton also came up with important early theories of both optics and calculus during this period. In 1667, when he returned to Cambridge, he had theories in hand. Quarantined Italians Sing Together From Their Balconies During Coronavirus Lockdown, Viral Videos Will Melt Your Heart.

The Bubonic Plague that swept through the English countryside forced many into quarantine. Some academic believe that Shakespeare did not ignore the plague but took advantage of it. Shakespeare likely wrote three plays—King Lear, Macbeth, and Antony and Cleopatra, during the plague between early 1605 and late 1606. Whether inspired by social distancing or not, the historical fact sparked a broader discussion on social media.

If social distancing has you down, just remember that Shakespeare most likely wrote “King Lear,” “Macbeth,” and “Antony and Cleopatra,” during a plague-inspired quarantine between early 1605 and late 1606. https://t.co/SOp7SMn1KG

France has declared a nationwide lockdown, and Spain is set to follow the same while Georgia in the United States has delayed presidential primary. The USA is also planning to reportedly ban travel from the UK and Ireland. Meanwhile, in India, some states have ordered malls, gyms and swimming pools to shut down. So, if you are quarantined or self-isolating, this could be the best time to stress on some crucial thoughts. Who knows? Maybe, while sitting at home, you might come up with your breakthrough.

(The above story first appeared on LatestLY on Mar 17, 2020 08:33 AM IST. For more news and updates on politics, world, sports, entertainment and lifestyle, log on to our website latestly.com).