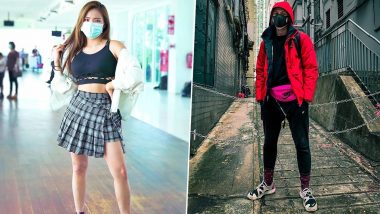 Coronavirus which emerged from a seafood and animal market in China's Wuhan city has spread as far as the United States. It has killed 132 and there are nearly 6,000 confirmed infection cases. At a time when the epidemic has become the cause of sorrow and grief for many, social media influencers are trying to get some fashion inspiration from it. Instagram Influencers have taken to the social media platform sharing of them posing with face masks covering their mouth and nose. The pictures look like they are trying to make it a fashion statement. Some of them are even matching the colour of their outfit with the mask. Their fashion bit is doing rounds on social media by the name 'Influenza Influencers'. While is essential to wear masks during the spread of such a deadly virus, trying to convert it into a fashion accessory belittles the crisis scenario. Australian Instagram Model Accused of Swimming in 'Sacred' Natural Springs in New Zealand, Rubbishes Claim (See Pictures)

This is not the first time Instagram influencers acted without thinking about the gravity of the situation. Instagram influencers were slammed for treating Chernobyl nuclear death zone as a photo point for pictures, only to post on social media. They were called out for being insensitive following which many of them took down the pictures. The trend had begun after Sky/HBO series Chernobyl detail the event released.

Here Are The Pictures:

everything is a fad to these people. they're not human.

According to the World Health Organisation, the common symptoms of the novel coronavirus includes fever, cough, shortness of breath and breathing difficulties. The Chinese government has already appealed to people who have been to China and have returned after January 1 to report to state-run hospitals if they are suffering from cough or mild fever.

(The above story first appeared on LatestLY on Jan 29, 2020 02:37 PM IST. For more news and updates on politics, world, sports, entertainment and lifestyle, log on to our website latestly.com).