The women of K-pop face have already created a huge fanbase with their songs which are no less than an audio-visual treat. To mark International Women's Day 2022, we have brought to you a list of the top five all-girl bands who have been enjoying a heyday of their own. 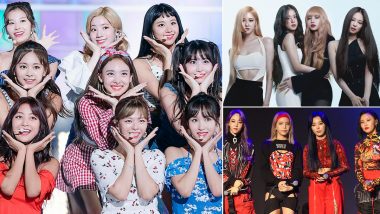 From the golden age to 00s favourites, women have continuously been growing and creatively reshaping the music culture. They have produced praise-worthy tracks and have spread the word of female empowerment across the world. Speaking of music, Korean culture has a different and huge fan base across the sphere. The K-pop tracks are sweeping the globe by creating a world that has bangers as well as soft tunes. Popular Korean all-girl bands have created a brand new and unique music scene with their high-octane performances and stylish looks. International Women’s Day 2022: Know Date, IWD Theme, History and Significance of Celebrating the Achievements of Women in Every Field.

The global celebration of International Women's Day aims to recognize and acknowledge all the gorgeous yet bol females who have made their own identity with their hard work and conscientiousness. This year, the special day will be observed on Tuesday, 8 March. As the world celebrates International Women's Day 2022, why not remind yourself of some of the most influential K-pop girl groups from down the years, as well as bands still making magnificent music today. We have curated a list of the top five all-girl bands, that have carved a niche for themselves in the Korean Industry. International Women's Day 2022 Greetings: WhatsApp Messages, Encouraging Quotes On Women Empowerment, Sayings And HD Wallpapers For The Global Celebration.

The best-loved South Korean all-girl band has  Miyeon, Minnie, Soojin, Soyeon, Yuqi, and Shuhua as its members. They were dubbed “monster rookies” upon their debut.

Apart from the colourful fashion statement, the girl group which consists of four members Solar, Moonbyul, Wheein, and Hwasa is known for making jazz, R&B, ballad, and pop tracks.

The girl bands also have fans who don't understand the Korean language but they still go crazy after their releases despite incomprehension. As the motive is to support and appreciate the skills of the girls. Thence, celebrate Internatioal Women's Day by tuning in with some of the soothing and melodious songs by K-pop girl-bands.

(The above story first appeared on LatestLY on Mar 07, 2022 11:30 AM IST. For more news and updates on politics, world, sports, entertainment and lifestyle, log on to our website latestly.com).