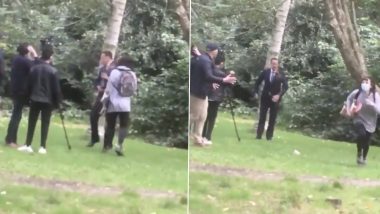 Ireland’s Indian-origin Deputy Prime Minister Leo Varadkar was giving an interview in Dublin, when a woman threw a drink on his face. The video of the incident which is going viral shows Varadkar standing in a lawn as camera crew records him. Soon, a woman wearing a backpack, grey top and black slacks can be seen approaching him. She goes near them as the crew looks at her and waits for a few seconds. No sooner, she throws a drink over Varadkar's face and suit and runs away. The camera crew can be seen looking at her in bewilderment as she does the act. The incident happened on Friday at 3pm.The Irish Deputy PM was explaining new coronavirus restrictions to the people of Dublin when the incident occurred. As the video went viral, many took to social media condemning the act. NCP Workers Throw Crabs Outside Maharashtra Water Minister Tanaji Sawant's Home to Protest His Remarks on Tiware Dam Breach; Watch Video.

The woman wearing a facemask and holding skateboard under one arm looked quite suspicious as she approached the minister. But her act of tossing the liquid from the white cup left everyone stunned. One of the crew members could be seen walking towards her in utter shock as she runs aways. The Irish PM can be seen standing there looking at his blazer that has been stained from the drink. The incident seems to have been recorded by a bystander.

Video of Woman Throwing Drink at the Irish Deputy PM:

You can dislike Leo Varadkar, you can criticise his policies, you can disagree with him, but this is nasty and unnecessary thing to do. pic.twitter.com/ze8eVByU3S

2018 Irish Presidential candidate Gavin Duffy took to Twitter condemning the incident, "What a horribly uncouth thing to do to Tánaiste Leo Varadkar. This is an attack on our democracy, not him. It's reported it was coffee but it could have been anything including acid. We need to better protect our politicians."

What a horribly uncouth thing to do to Tánaiste Leo Varadkar. This is an attack on our democracy not him. It’s reported it was coffee but it could have been anything including acid. We need to better protect our politicians. pic.twitter.com/JVnbqN6UmW

In a press conference later that day, Varadkar said that he had finished filming the video before the woman interrupted them. The Guardian reported them as saying, "The good news is that we got it finished before the incident." He also clarified that he was not seeking extra security measures following the incident. He also jokingly added that he mistook the woman for pop singer Avril Lavigne because of her skateboard. He said, "I thought it was Avril Lavigne at first because of that skateboard and everything but unfortunately it wasn’t. She also had a smoothie, which ended up all over my face and halfway down my suit. But I had a spare suit and just got on with the day’s work." The Irish police are investigating the incident.

(The above story first appeared on LatestLY on Sep 20, 2020 02:02 PM IST. For more news and updates on politics, world, sports, entertainment and lifestyle, log on to our website latestly.com).