Twitterati is praising the film and already calling it a blockbuster hit. But as much as the praises, there are also the funny memes that follow. 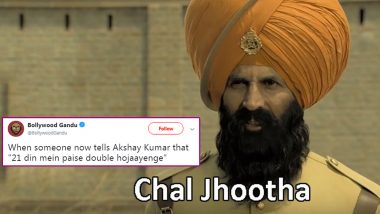 The trailer of Akshay Kumar's first film this year, Kesari released last night. And needless to say, the trailer emotes volumes about the unsung Sikh heroes who fought in the Battle of Sargarhi. The actor is a master when it comes to playing roles based on national topics. He is essaying the role of Havildar Ishar Singh in Kesari and until the very last frame of this trailer, he displays immense courage. The tale of sacrifice and bravery looks interesting from the first look and Twitterati is praising the film and already calling it a blockbuster hit. But as much as the praises, there are also the funny memes that follow. It seems to have become the norm of social media to make certain jokes and find humour from any new release. So Kesari memes are also being made and shared on social media. Kesari Trailer: Akshay Kumar and Parineeti Chopra Starrer Tells The Heroic Story of Nation's Unsung Warriors - Watch Video.

Kesari documents the real-life story of the battle fought between 21 Sikhs against an army of 10,000 Afghan invaders. So the film's trailer too has some power-packed fight scenes. Other than the war action scenes, the film's trailer has a dialogue wherein Akshay says, "Chal Jhoota" to the Afghan warrior. This particular scene has inspired a lot of funny memes and jokes. Check out all the funny memes that are being made on Kesari trailer. Salman Khan's Entry in Bharat Teaser is Power-Packed But You Can't Miss These Funny Memes on It.

Did you say, Girlfriend?

Pados ki aunty when you get less marks than his son:#KesariTrailer #Kesari #AkshayKumar pic.twitter.com/HU4nveyAk9

When I see the questions in the question paper vs the Time Remaining #Kesari #KesariTrailer pic.twitter.com/BOU0HP9QEk

The fan base has been created

The film is also receiving huge praises for Akshay Kumar's look, the captivating poster and the brave action scenes. The film stars Parineeti Chopra as the lead actress. Directed by Anurag Sinha and co-produced by Dharma Productions, the film Kesari will hit the theatres on March 21, 2019. With the trailer already creating such a strong vibe of success, it will be interesting to see the entire action.

(The above story first appeared on LatestLY on Feb 21, 2019 04:09 PM IST. For more news and updates on politics, world, sports, entertainment and lifestyle, log on to our website latestly.com).