Kylie Jenner is facing flak online for asking her fans to donate money for her makeup artist's brain surgery. The issue that fans have in this case is the fact that the beauty mogul herself is a billionaire and should be able to fund this on her own. 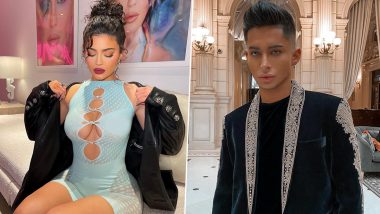 Kylie Jenner is facing flak online for asking her fans to donate money for her makeup artist's brain surgery. The issue that fans have in this case is the fact that the beauty mogul herself is a billionaire and should be able to fund this on her own. Internet users are calling out Jenner for asking for money from the fans when she is fully capable of paying for it herself. It all started after the reality star requested fans to help her makeup artist, Samuel Rauda, who needed brain surgery after an accident. However, this act of kindness soon turned into a major debacle on social media after fans began to call her out.

Kylie has an army of fans who usually support her for everything she does but ever since Kylie's GoFundMe request, many have been criticising her for asking for donations despite being a billionaire. Kylie Jenner with a net worth is $900 million and a previous title "self-made billionaire" shouldn't be asking funds from her fans, it what netizens believe. Currently, 279 people have contributed to GoFundMe that is organised by Johanna Portillo.

Amongst all the criticism one user wrote: "Kylie Jenner better open up one of her birkins and stop asking us poor folk to donate to her makeup artists’ gofundme." Another added, "I can’t stand Kylie Jenner’s influence. From posting pictures of her closet, with purses worth more than people will see in a lifetime, to her posing with multiple vehicles, while asking people to donate to her friend’s medical fund when she could have paid it quietly? Nah."

Samuel has been Kylie Jenner's makeup artist for long but has also worked with other celebrities. His Instagram handle is @makeupbysamuel through which he gives a glimpse of his work.

Kylie Jenner was facing backlash online, sometime back for her latest product of Kylie Skin—well, a hand sanitiser. It didn’t settle well with the people online. After launching her $7 Kylie Skin hand sanitiser, the beauty mogul is facing accusations of ‘profiting off the pandemic.’ While others were of the opinion that the product should have been free, as people continue to struggle amid the global health crisis.

(The above story first appeared on LatestLY on Mar 21, 2021 04:53 PM IST. For more news and updates on politics, world, sports, entertainment and lifestyle, log on to our website latestly.com).