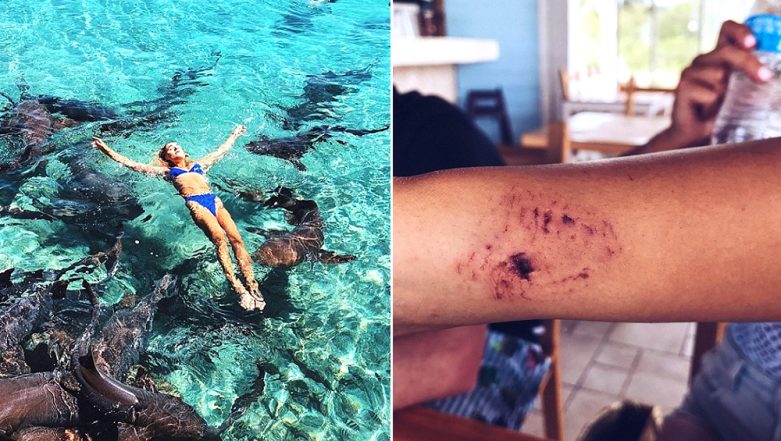 Models and content creators go a long way to make their social feed more interesting to their followers. A lot of them have even opted for the influencing as their career, thus struggling to make the perfect shots. Katarina Elle Zarutskie, a model from California got bitten by sharks when she got in the Staniel Cay for a photoshoot. The 19-year old model was visiting the site with her boyfriend's family. But the safe activity of 'swimming with the sharks' turned into a horror for her.

The 19-year old girl is a nursing student, Instagram model and was probably creating a good content for her next posts on the photo-sharing social media site or just relaxing. She clearly missed the warning of 'nurse sharks can and do bite." The girl was swimming in with the sharks around, and her boyfriend's father was clicking her pictures. The entire incident has thus been captured in the pictures.

The site does have a herd of nurse sharks around her and it looks risky. Things went terribly wrong when the shark not only bit her hand but began dragging her in the water. Luckily the girl was able to free herself quickly and managed to swim to the coast as quick as she could. Thankfully even the blood dripping from her hands did not attract the other sharks, otherwise, it would have been a calamity, even costing her life. It was a 5- foot long shark which had attacked her. Australian Woman Pulled in Water by Sharks, Miraculously Survives! Watch Video.

Talking about the horrific incident the Katarina Zarutskie was quoted, "He had my wrist in his mouth and I could feel his teeth sinking into my arm. I was pulled underwater for a few seconds and then ripped my wrist out of the shark’s mouth as fast as I could." Her boyfriend's family too was not very sure about her swimming with the sharks. She also did not go through any tour organization as well but having grown up as a surfer she decided to dive it. Well, she would have got her lesson we assume. The doctor has told her that her scar will remain. The girl is clearly fortunate to have not lost her entire arm.