He had messaged her on Tinder saying that the dress she was wearing looked awful. 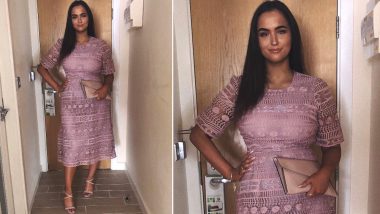 A random man insulted a woman on Tinder saying that the dress she was wearing looked awful. She took to Twitter sharing screenshots of the distasteful messages sent to her with the caption 'men are trash'. The man messaged her saying, that he felt the need to let her know that her dress was bad and she needs to shop from a nice place. Thea Lauryn Chippendale's tweet went viral with people hitting out at the man's nasty comments. Dating Site Dupes 65-Year-Old Man of Rs 46 Lakh Offering Pictures & Video Call With Young Woman.

He messaged her that her dress looked like a 'charity shop job'."Not gonna life you're a bit of a joke but that dress in the last photo is not doing any favours. Hope this helps." He also messaged saying, "Literally had to tell you else I wouldn't of slept." He even wrote, "Shop somewhere decent! Thanks. Hope this helps." US Teen Takes Himself Out as Date for School Prom, His Half-Suit and Half-Dress Pics Go Viral!

Here is the dress in question and the man's comments:

Men are trash. (Included the pic he’s on about 🙃) pic.twitter.com/3pi6NHl0Oy

The dress which received criticisms is actually an ASOS design. It's a midi dress with an A-line skirt and costs approx Rs 6,800 (Not really a charity business!). However, tables changed when ASOS decided to feature Thea as their model to advertise their blush pink lace dress. Promoting the dress, the British online fashion brand tweeted the 20-year-old's photo with the caption, "@theachippendale Swipe right to see who had the last laugh."

Thea retweet ASOS' tweet saying, "This is insane, thank you so much." Thanks to George's short-sightedness and shallow mind, Thea just got to be famous. We hope that helps everyone who is planning to insult people on social media or others for no reason.

(The above story first appeared on LatestLY on May 04, 2019 04:51 PM IST. For more news and updates on politics, world, sports, entertainment and lifestyle, log on to our website latestly.com).