Men Risk Their Life to Rescue Cobra Trapped in Well, Vigilant & Brave, Video of Snake Being Saved by Men Will Startle You!

Video shows a cobra swimming in the water, while being trapped in a well. Unable to find its way out, a group of men came to the rescue. The video is going viral on social media platforms as netizens laud the men who tried their best to rescue the snake and were indeed successful. 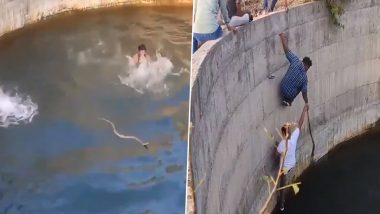 Snake videos and photos have the power to give anyone some serious nightmare, unless you are a snake lover. We have often come across many snake videos that include both frightening and at times, even less-scary. Again, there are snake rescue videos that intrigue netizens. However, the latest one is earning mixed reactions. While some cannot stop praising the men who bravely saved the snake, others are startled at the method to do so. The video is going viral on social media platforms as netizens laud the men who tried their best to rescue the snake and were indeed successful.

Snake rescue videos often tend to go viral on the internet. Last year, a snake catcher Nirzara Chitti went viral for saving a cobra while dressed in saree. Her courage was praised. Again, a rare two-headed Russel Viper was rescued from Kalyan area, Maharashtra, last year. However, the latest video is defying all odds. The slightly long clip shows how a group of men trying their best to save the snake was trapped in a well.

IRS officer, Naveed Trumboo shared the clip as well. The video shows the cobra swimming in the water, while a man, jumps into the well, and begins to splash water on the reptile in order to direct it towards another man, who is balancing himself at the step from where he could pick up the snake from the well. He carefully passed the reptile to another man, who was waiting in a similar position, slightly upwards, and then again, passed it to another man, who with the use of a steel rod released the snake into the jungle. The place of the incident is not known, but the clip has startled netizens.

Man jumps into well to save a cobra from drowning. It's rare to see someone risk their own life like this. Very admirable. pic.twitter.com/fZF2UsQRlE

The video has gone viral, and people are all in praise. But the method was scary and a total nail-biting moment. Anything could have happened, either the men or the snake could have been hurt, but thankfully, the reptile was released into the forest with the careful process.

(The above story first appeared on LatestLY on Feb 17, 2021 12:36 PM IST. For more news and updates on politics, world, sports, entertainment and lifestyle, log on to our website latestly.com).