Monkey Punches Innocent Little Girl in Face at a Zoo in China; Watch the Viral Video

This innocent little girl China who was serving the monkey got knocked right in the face. The young girl falls flat on the ground and screams. 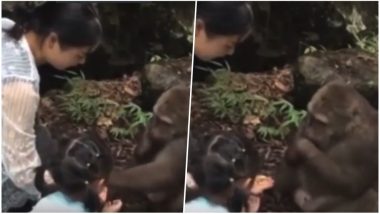 Whenever we visit the national parks and zoos, among all the animals, we love to see are the monkeys. With their cutest little hands and face, their movements are the funniest sights of all. Maybe because they almost have the same attitudes and characteristics like us! Needless to say, the long-tailed primates are restless, mischievous and absolutely adorable. But you better be careful when it comes to feeding them. Otherwise, you might end up getting punched just like this innocent little girl in China who was serving the monkey got knocked right in the face. A viral video of the incident seemingly at a Zoo was highlighted by a local news portal, CGTN which so far gathered millions of views.

At the beginning of the video, the monkey is seen to accept the refreshments from the girl and her mom, all happy. But things turned little weird when the woman tried to play around with the primates by hiding the food and teasing it. The monkey who clearly got annoyed by such behaviour, in the act of revenge punched the innocent child in the face. Ouch! The sudden blow was strong enough, and the young girl falls flat on the ground and screams.

Watch the video of the monkey who punched the little girl right on her face!

However, it is unclear if the girl was injured and even the place where the event took place could not be discovered. The China Global TV Network (CGTN) obtained the footage and confirmed that the monkey was being bothered before it lashed out the tiny tot. Across the world, zoos allow visitors to feed animals but warn them not to tease any creatures otherwise they retaliate which so happened in this recent episode. It is better not to mess with them.

(The above story first appeared on LatestLY on Jul 10, 2018 07:59 PM IST. For more news and updates on politics, world, sports, entertainment and lifestyle, log on to our website latestly.com).