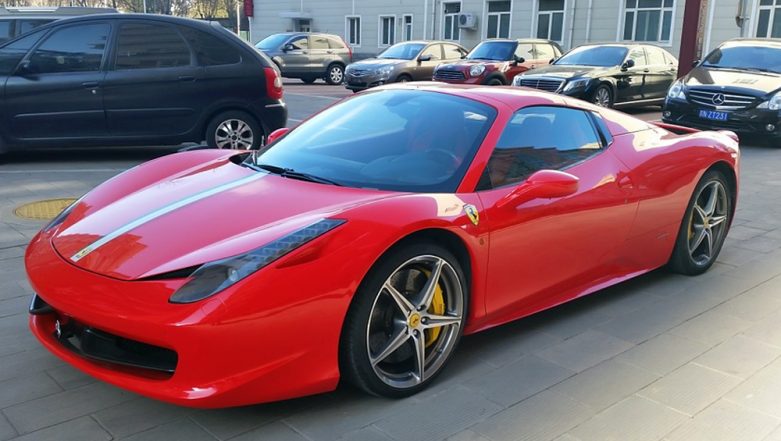 In a recent viral moment, a young woman has grabbed the headlines for twerking, completely naked on a Ferrari in the streets of Ibiza, Southern Europe. Along with her, was the driver, captured smoking a cigar, while driving at the Marina of the Balearic Islands. The pair’s behaviour has outraged people in the Spanish region as the clip is being widely shared online. Local police authorities are tracking the unidentified man and woman with the help of the pictures and video surfacing on social media. Mother Kicked Off EasyJet Flight in Spain For Wearing See-Through Top Without Bra.

As the video continues, the woman further can be seen draping herself across the windscreen as the car began to enter the Marina. The video clearly shows the faces of the two as the young woman is seen moving her body to the beat of the music. And the driver is seen holding a fat cigar as he drives the red Ferrari through the streets with the naked woman on the top. The hunt for the pair is on, as reported by the Daily Mail.

Here’s something you don’t see everyday... but you wish you did... A young woman and a driver have caused outrage in #Ibiza after the pair were caught driving in a #Ferrari to #IbizaMarina with the woman completely #naked pic.twitter.com/ljXyM8SjOc

The report further adds that the couple could be fined up to £458 (Rs 39,804 approx.). The authorities hope to track down the rider and driver soon as they said there are not many cars like a red Ferrari in Ibiza. The recent incident has come in after a drunk woman in Wales tried to twerk on a Police officer. Again, in another case, a woman was captured flashing her butt while twerking onboard a Spirit Airlines flight from Orlando, after she was asked to turn off her phone.