A mother of two was asked to leave an EasyJet plane in Spain for wearing a see-through cleavage-revealing top. She eventually had to sleep on the airport floor and board another flight the next day. 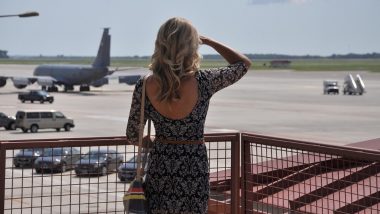 A 31-year-old mother of two, Harriet Osborne was asked to leave an EasyJet flight in Spain for wearing a low-neck see-through top without a bra. Reportedly, she was asked to leave the flight from Malaga to Stansted by the crew members by saying that her choice of clothing was not appropriate for a plane with children on board. She said that while she was not wearing a bra, she had nipple covers and tape. After a plane did not carry her, Harriet had to sleep on the floor at Malaga airport with her friend. She had to pay £149 for a flight to go home the next day. Air New Zealand Kicks Out Female Passenger Who Refused to Heed Safety Instructions.

Harriet detailed her experience to The Sun saying, "The crew were horrible and made me feel cheap. This air hostess confronted me in front of the whole plane and said I wasn’t allowed on in that top. She said to me, 'Oh no, move to the side', and tried to cover me up with my hands. She said, 'You're not coming on my plane like that — you need to put a top on'. Then she ordered me off the plane, so of course, I put a top on." Woman Flashes Her Butt While Twerking Onboard a Spirit Airlines After Creating a Ruckus on Being Asked to Turn Off Her Phone (Watch Viral Video)

She continued saying, "When I tried to get back on she turned to the ground crew and said, 'She's not coming on my plane'. I was escorted away from the aircraft. I was in shock. It was so sexist. I just burst out crying. We had to walk back through the terminal where Spanish police stopped to question us. They were baffled when I told them why we'd been kicked off." Saudi Plane Forced to Return Immediately After Take-Off As Mother Forgets Baby at Airport.

However, reportedly, some passengers onboard had complained that they could see Harriet's nipples. EasyJet was quoted as saying, "Crew politely requested the customer wear an additional top which she agreed to. However, she then proceeded to act disruptively towards a member of the crew"

(The above story first appeared on LatestLY on Jun 29, 2019 04:51 PM IST. For more news and updates on politics, world, sports, entertainment and lifestyle, log on to our website latestly.com).