Last month a newborn was born and right after its birth it was captured holding onto his mother's intrauterine device (IUD) in hand. While the newborn looks adorable, the IUD in his hand is unmissable and pictures of the "oops" moment were shared online. 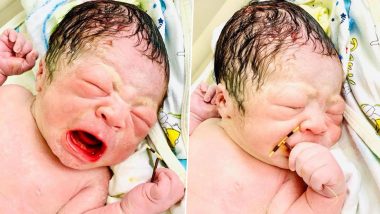 It is said time and again that not all contraceptives work 100% and a baby in Vietnam came out and held the proof right after! It so happened that last month a newborn was born and right after its birth it was captured holding onto his mother's intrauterine device (IUD) in hand. While the newborn looks adorable, the IUD in his hand is unmissable and pictures of the "oops" moment were shared online. It is no surprise that the picture is going viral. Madhya Pradesh: Woman Gives Birth to Baby Without Any Limbs, Doctors Baffled! Know More About This Rare Congenital Disorder Tetra-Amelia.

The little one was born at Hai Phong International Hospital in northern Vietnam. The IUD also came out at the time of delivery. When the obstetrician was clicking the picture of the newborn, the child held on to the device firmly. The pictures were shared on Facebook and they quickly went viral. The doctor told local media, "After delivery, I thought him holding the device was interesting, so I took a picture. I never thought it would receive so much attention." But we are not too surprised that the picture is being loved online. Woman Almost Bleeds to Death After Inserting an Intrauterine Contraceptive Device.

Check The Viral Pics of The Baby Holding UID Here:

Cute, isn't it? The pictures have gone viral with over 4,000 shares. This is not the first time such a scene has been captured. Back in 2017, another such photo of a newborn went viral, which showed the little one holding on the UID. Here too the little boy held on the T-shaped device tightly just moments after it was born. The mother nicknamed him "Mirena Baby".

For those unaware, an IUD is a T-shaped device that is inserted in the uterus using a medical procedure to prevent pregnancy. It is said to block sperm from reaching and fertilising eggs. It is considered to be highly effective but looks like in this case, the sperm was definitely stronger. As per reports, the woman had inserted the IUD two years ago. It is rare for a pregnancy to occur after interesting the IUD but the doctors said maybe it would have moved from its position internally.

(The above story first appeared on LatestLY on Jul 15, 2020 09:11 PM IST. For more news and updates on politics, world, sports, entertainment and lifestyle, log on to our website latestly.com).