Rajput, a popular TikToker from Rahim Yar Khan with over 2.5 million followers, was reported dead by his wife, Farah Adil, on their TikTok account where they regularly upload videos together, Express Tribune reported. 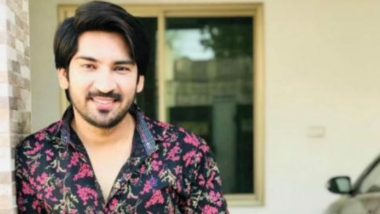 Islamabad, September 16: Pakistani TikTok star Adil Rajput has enraged his fans as he faked his own death on the video-sharing app. Rajput is being called out by Twitter users for carrying out a publicity stunt.

Rajput, a popular TikToker from Rahim Yar Khan with over 2.5 million followers, was reported dead by his wife, Farah Adil, on their TikTok account where they regularly upload videos together, Express Tribune reported. 'Main Gareeb Hoon' Video of 'Poor Boy' Goes Viral as Twitterati Create Funny Memes And Hilarious Versions of it to Address Different Concerns.

"Adil is no longer with us," she said, in tears, adding that she had just received a call informing her of an accident and that Rajput had passed away. As the video gained momentum on social media, a local mosque also announced the news as per ritual. Following this, many fans made their way to Rajput's house to offer condolence and found that the star was alive and well. Farah later uploaded another video explaining the 'misunderstanding'.

"Allah has granted another life to Adil (Rajput). Adnan called again and said that Adil had fainted and he thought he had died," she said. She also slammed the media for propagating false news and sensationalising on their pain.

Video of Adil Rajput with a cast on his leg and a bandaged head also started doing the rounds shortly thereafter. Angry fans exclaimed that this is not the way of getting fame. Toni Leistner, Hamburg Defender, Enters Stands to Pick Up Fight With Fan After Wife and Daughter Verbally Abused.

"I swear I didn't know about this man, but after his fake death news for publicity and fake fame, I realised that TikTokers are only junk," wrote one user, clearly taken aback by the stunt. Another echoed the same sentiment, writing, "This way of getting fame is not at all appropriate. Don't make fun of relations to become famous."

Some pointed out how the couple seemed to have hit the nail right on the head as they have been trending on Twitter since the news first broke.

"#AdilRajput trending on number two. He got what he wanted," shared a user. "Trending, getting fame... That's all they want. Shameless," penned another user.

In July, Pakistan issued a "final warning" to short-form video app TikTok over explicit content posted on the platform, while live-streaming app Bigo Live was blocked for 10 days for the same reason. Pakistani authorities reiterated that concern to TikTok officials in a recent meeting.