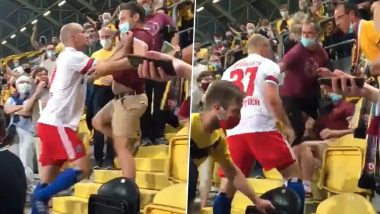 Hamburg didn't have a great outing against Dynamo Dresden in the on-going German Cup as they failed to put up a substantial fight and lost the game 1-4. Other than the on-field battle, however, the game gained attention for Toni Leistner's action. The Hamburg defender entered the stands after the match to pick up a fight with a Dresden supporter. In a viral video, the former Dynamo player can be seen charging down to the supporter, throwing him in the ground after the final whistle. Security officials and other fans intervened in the matter, and Leistner was sent back to the ground. Later, the 30-year-old revealed that the fan verbally abused him. Mesut Ozil Sends Arsenal Fans in a Frenzy After Trolling Tottenham Hotspur on Social Media.

"After the match in my hometown, I was verbally abused from the stands. I can usually cope with it. But this was extremely and massively below the belt, against my family, my wife and my daughter," Leistner, who played for Dynamo Dresden from 2010 to 2014, wrote on his Instangram story after the match.

Though the footballer explained the reason, he also apologised for his violent act. "That's when I lost it, even more so because it was already an extremely emotional match for me. Regardless, this should have never happened to me. I am a father who wants to serve as a role-model. I apologise in all forms and can only promise that -- no matter what insults are thrown my way -- this will never happen again," he added.

Hamburg got beat by Dynamo Dresden 4-1 in the Pokal tonight and their player Toni Leistner decided to do this... pic.twitter.com/lBucp9j7aX

Dynamo Dresden also criticised the fan's behaviour and vowed to take action against him. "Disgraceful post-match insults against Toni Leistner from a fan of his hometown club. We are looking for that person because we will not let this incident stand like that. We'd like to thank 99.9 percent of those attending the match today for their support," the team said in a statement.

Fans had been allowed to enter the stadiums for the match after the local authorities accepted Dresden's proposal. More than 10,000 spectators were present in the stands. However, they all were strictly instructed to wear masks and follow the social distancing norms.

(The above story first appeared on LatestLY on Sep 16, 2020 08:55 AM IST. For more news and updates on politics, world, sports, entertainment and lifestyle, log on to our website latestly.com).