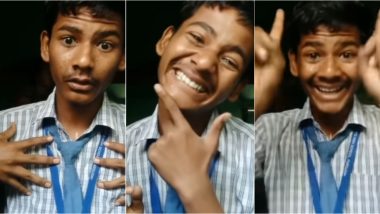 Video of a young boy saying 'Main Gareeb Hoon' has gone viral on social media platforms. It seems the video was made as an interpretation of the life of a poor schoolgoing boy. However, this one went viral with netizens creating varying renditions of it, with some of them being really funny. Soon, Main Gareeb Hoon funny memes and hilarious jokes also began to flood social media. Watch the original Main Gareeb Hoon video below and some funny imitations of it. Many took to Twitter asking about the boy and what made him make the video. Meanwhile, YouTuber Ashish Chanchlani also made a version of it saying 'Main YouTuber Hoon'. Alien Life on Venus? Netizens Make Funny Memes and Jokes on Recent Possibility of Finding Extraterrestrials on Planet Other Than Mars.

In the video, the boy says, "Main gareeb hoon, mere mummy papa mujhe gareeb janam diye. Mujhe mummy papa se badhkar koyi bhi cheez nahi hai. Main gareeb hi thik hoon." (I am poor, my mother and father gave birth to me as a poor one. My mom and dad are everything to me. It's okay if I am poor). As the video went viral, people came up with various versions of it. From being farmers, NEET aspirants, gareeb 2.0 among others. Another one made a funny video where he complains of being rich. Watch the videos below as people continue to create more such. CarryMinati on Bigg Boss 14 Funny Memes and Jokes: Fans Share Hilarious Posts Taking a Dig at Ajey Nagar for Reportedly Joining Salman Khan's Show After Roasting It on Several Occasions.

Everyone is trending on...

But what about "Main Berozgaar Hoon" ??

My Last Tribute to all NEET Aspirants 😃😀

Sequel of blockbuster ‘Main Gareeb hoon‘ is out.

Watch it at you own risk! 😂 pic.twitter.com/GtpkIW80O8

What is This Even?

Stop Laughing if You Can!

Twitterati is creating more such videos with some explaining serious topics through the same pattern. Stay tuned to LatestLY for more such updates on videos and stories going viral on social media platforms.

(The above story first appeared on LatestLY on Sep 16, 2020 01:30 PM IST. For more news and updates on politics, world, sports, entertainment and lifestyle, log on to our website latestly.com).