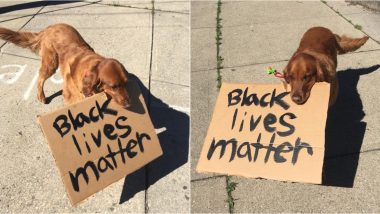 A dog has gone viral for showcasing its support towards the Black Lives Matter protest. A video which was taken during a protest in Cincinnati over the death of George Floyd is being widely shared on twitter. The clip shows the woman walking the golden retriever on a leash as it holds the placard. The video was widely shared with people appreciating the dog for supporting racial equality and the black community. As the dog makes way through the demonstrators, people can be heard saying "Be Heard, Be Safe: Rally for Justice" protest. Black Lives Matter Protest: Powerful Photos From George Floyd Protest That Show Resistance, Anger, Despair, Hope And Love!

While most netizens praised the dog and its owner for showcasing their support, some criticised the woman for taking the dog to the place as incidents of violence were also reported. However, Sarah Emrick, the owner of the dog named Buddy, said that it was a peaceful protest and that the dog was safe. Sharing pictures she wrote, "We are back home and safe. It was a peaceful protest and we left before the curfew. I would never put him in harms way (sic). I was very careful and was aware of my surroundings. I made sure to leave way before things got crazy."

We are back home and safe. It was a peaceful protest and we left before the curfew

I would never put him in harms way. I was very careful and was aware of my surroundings. I made sure to leave way before things got crazy pic.twitter.com/AR8JPLc8Zw

A dog joined protests with his owner in Cincinnati, Ohio, as they made their way through the city surrounded by demonstrators and carrying a cardboard sign in his teeth that read "Black Lives Matter." https://t.co/UN57wpeupf pic.twitter.com/XHRqqRvHHO

George Floyd, a 46-year-old African American died on May 25 when after Derek Chauvin, a cop from the Minneapolis police department knelt on his neck for over seven minutes. A day later Floyd died and Chauvin was charged with third-degree murder. However, the incident led to large scale protests across the United States. The protests turned violent with protesters burning down public property and looting stores. American president Donald Trump said the US military would be deployed if the states fail to contain the mob.

(The above story first appeared on LatestLY on Jun 04, 2020 02:50 PM IST. For more news and updates on politics, world, sports, entertainment and lifestyle, log on to our website latestly.com).