A photo komodo dragon has raised quite an eyebrows on the internet. The image shows the lizard facing off with a pair of nervous construction workers looking on from the top of their truck. The picture has gone viral online and sparked debates among environmentalists over its natural habitat. 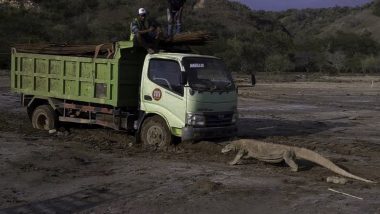 Komodo dragons are the heaviest lizards on Earth. They have long, flat heads with rounded snouts, scaly skin, bowed legs and huge, muscular tails. Living in the islands of Indonesia, these athletic reptiles have made appearances on social media, introducing a little more details about its habitat and threats, that not many of us have known. Now a photo komodo dragon has raised quite an eyebrows on the internet. The image shows the lizard facing off with a pair of nervous construction workers looking on from the top of their truck. The picture has gone viral online and sparked debates among environmentalists over its natural habitat.

According to reports, the viral photo is shot on Rinca Island in East Nusa Tenggara’s Labuan Bajo Regency in Indonesia, where the central government is currently building premium tourist facilities, dubbed as the country’s own Jurassic Park. The construction is underway, and the Komodo dragon was captured, facing the workers in the area. The picture has raised concern among environmentalists who are concerned about its natural habitat. Komodo Dragon Tries to Have Sex With Hidden Cameras, Tears the Equipment Installed for BBC’s Spy in the Wild II Shoot.

"Sad! Komodo face to face with a Jurassic Tourism building project truck on Rinca Island. This is the first time for Komodo2 to hear the roar of car engines and smell the smoke. What will the future impact of these projects be? Does anyone still care about conservation?" reads the tweet.

Soon after the photo went viral and sparked debates online, an official of the country’s environment ministry reported that the park rangers are ensuring the safety of the dragons roaming near the side. The official further pointed out that the encounter was not necessarily dangerous for either lizard or man, as it was a common occurrence and the park staff and construction workers were trained to anticipate such scenes. Media reports further added that there were some 60 komodo dragons on this part of Rinca Island, around 15 of which come in regular contact with or are often spotted near human settlements.

Last year, the Indonesian government said Komodo Island would close to tourist in 2020 to protect the animals after many Komodo dragons were smuggled and sold. The current Komodo population in the country is about 3,000.

(The above story first appeared on LatestLY on Oct 28, 2020 04:49 PM IST. For more news and updates on politics, world, sports, entertainment and lifestyle, log on to our website latestly.com).