As married couple Logan and Daley are open-minded about they are sexuality and are living comfortable in a polyamorous relationship with girlfriend Ilona Lucille Westerna in Texas ranch. 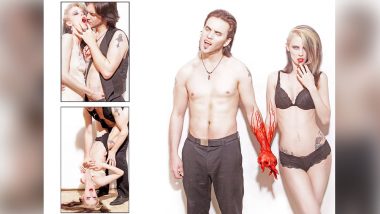 Vampires have always been the most fascinating mythical characters as they are popular in literature and cinema. But as it turns out, that these blood-sucking creatures do really exist in the real world, as reported in a recent case. Polyamorous couple Daley Catherine, 30 and Logan South, 31 are known as the king and queen of the Vampire Court of Austin, Texas. The couple who identify as vampires are building a growing network of blood suckers in Texas.

As reported in Daily Star, the pair have amassed 60 members of their vampire group who meet up once a month. While the members of the group don’t go around sucking strangers’ blood, they do take in the fluid in a less gory way. Logan said as opposed to popular perception, they prick the fingertips before consuming the liquid. Although they do live up to some stereotypes like choosing to sleep until the sun sets. They also revealed that if they are out in the sun for too long, they will fall sick.

You are more than a partner, you're a part of me. You are me. The best parts of me. Your patience is unyielding, your resolve unbreakable and your love knows no bounds. You've given me everything worth having in this life and many lives before. You taught me the meaning of the words "twin flame". Everyday I thank my stars and whatever gods may be that I found you. Every ounce of love I've found, every success, every dream come true...it's all because of you. Thank you my love, my life, my twin flame, my wife.

Daley Catherine in a Photo Shoot

As married couple Logan and Daley are open-minded about they are sexuality and are living comfortable in a polyamorous relationship with girlfriend Ilona Lucille Westerna in Texas ranch. Apparently, Ilona is Logan’s ‘submissive soul mate’ while Daley is his ‘twin flame’. Logan insists they don’t find it a problem.

Logan and Daley enjoy the perks of being in an open relationship. As reported in Daily Star, Logan said, “We decided to break down any potential notions of jealousy early on and realise that the most important thing was that both of us were happy, both of us were fulfilled and we realised that we could be more fulfilled by having other people in our lives, both sexually and in a relationship.”

(The above story first appeared on LatestLY on Jun 28, 2018 12:58 PM IST. For more news and updates on politics, world, sports, entertainment and lifestyle, log on to our website latestly.com).