One of the other people is her husband. Every week, she travels 16 kilometres (10 miles) through the forest to the nearest post office in a larger village to collect the post, supplies and pensions for her neighbours. 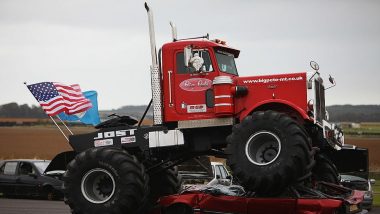 Pikhtovoye, August 21: Only five other people live in Galina Yermolova's tiny Siberian village Pikhtovoye, isolated from the world by the dense taiga -- swampy coniferous forest -- and a swamp. One of the other people is her husband. Every week, she travels 16 kilometres (10 miles) through the forest to the nearest post office in a larger village to collect the post, supplies and pensions for her neighbours. "We used to go by tractor. It would take us three hours," the 56-year-old said.

But recently, the couple's son gave them a life-changing gift: a huge-wheeled monster truck built by a friend that can plough through the muddy tracks much faster. With her husband at the wheel, Yermolova can now reach the post office in an hour.

It's still a bumpy ride and in the summer she holds onto the open roof, laughing, while her husband is refreshed by the breeze of a fan attached to the side of the vehicle. Once in the bigger village of Imshegal, home to around 100 people, she climbs down from the machine using a makeshift cloth step hanging from the back.

Cows roam outside the post office, one of the largely wooden village's few brick buildings. There, Yermolova loads basic goods such as sugar, washing-up liquid and shampoo, which have already come from a town some 100 kilometres away, onto her truck. Back in Pikhtovoye, she distributes them to her neighbours.

- More than a postwoman -

Being a postwoman has given Yermolova the opportunity to socialise. "There are only six of us here," she said. "For me, this job is about being able to talk to people." But Yermolova remembers different times. In the late 1980s, around 450 people lived in Pikhtovoye. By the mid-1990s, the local school closed down and mainly elderly villagers remained.

In busier times, Yermolova worked as a teacher, then as a librarian and a shop assistant. "When all those professions ceased to exist (in the village), I had to join the post office," she said. Yermolova and her husband, who works in forestry, are the only villagers with a job.

For her neighbours, Yermolova -- who they call "Galya", the affectionate version of her name -- is much more than a postwoman. In an isolated community 400 kilometres from the southern Siberian regional hub of Omsk -- three time zones away from Moscow -- Yermolova also brings something valuable with her: the news.

"Galya finds out what's going on in neighbouring villages, if something has happened," said 58-year-old villager Vladimir Negoyev, perched on a haystack while smoking. "Otherwise what would we do? We have TVs with 120 channels, but how would we know what happens here?"

(The above story first appeared on LatestLY on Aug 21, 2019 11:58 PM IST. For more news and updates on politics, world, sports, entertainment and lifestyle, log on to our website latestly.com).