Well, we are not commenting anything here, because "look at the abs" will not be an accepted suggestive caption for this picture. 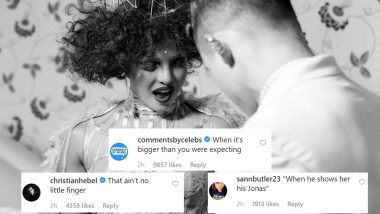 Nick Jonas and Priyanka Chopra walked on the Met Gala Pink carpet as husband and wife for the first time and it is the same place from where their love story began- Met gala 2017 wherein they both wore Ralph Lauren and won the Red Carpet. In 2019 too the husband and wife owned the pink carpet with their presence and it was a treat to sore eyes. Doing complete justice to the theme of the gala night aka Camp: Notes on Fashion, Priyanka opted for a silvery caged Dior ensemble colourful feathered ruffles and a matching cape whereas husband Nick Jonas gave Little finger (Game of Thrones) vibes at the gala.  Nick Jonas Channels Little Finger at Met Gala 2019? Twitter Thinks The Singer Looks Like Game of Thrones' Lord Petyr Baelish With That Thin Moustache!

Well, obviously the pictures were breathtaking, however, Nick Jonas posted an Instagram photo of the two from Met gala 2019 and Instagram is going berserk over the picture. Nick Jonas asked Instagrammers to caption the image and some of the captions were super hilarious. Some of the responses from verified accounts really took the cake. Now we know why Nick Jonas didn't caption the picture himself.

Take a look at the picture posted by Nick Jonas on Instagram from Met Gala:

Some of the really hilarious suggestive captions included:

Well, we are not commenting anything here, because "look at the abs" will not be an accepted suggestive caption for this picture. What say?

(The above story first appeared on LatestLY on May 07, 2019 12:38 PM IST. For more news and updates on politics, world, sports, entertainment and lifestyle, log on to our website latestly.com).