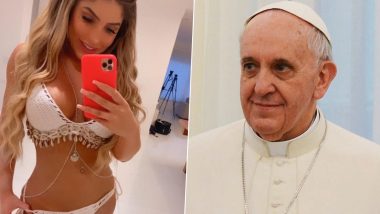 Lunna LeBlanc is about to feature on the Playboy magazine cover of Denmark. As per reports in the Daily Star, the blonde model who recently released her nude photoshoot said, "I would like the Pope to say a prayer for the success of my Playboy". She added that she follows his Twitter and Instagram and is inspired by his posts. "I follow Pope Francis' Twitter and feel at peace with his messages," she said. However, her request has received a backlash from many critics. She said, "I was told that my request was invalid and that I was too sensual to be able to follow something from Pope Francis." This request comes after recently, Pope Francis' account was caught liking a picture of sexy model Margott Foxx on Instagram.

Showing Off Her Curves

The model has even revealed her nude photoshoot recently, which is likely to be a part of the Playboy magazine. Now, it is not clear whether LeBlanc did actually went ahead to reach Pope Francis. But given her recent hot pictures, she would likely receive a lot more fans than blessings.

(The above story first appeared on LatestLY on Jan 17, 2021 09:30 PM IST. For more news and updates on politics, world, sports, entertainment and lifestyle, log on to our website latestly.com).