Spicy Chilli Oil Ice Cream Sundae Launched By McDonald's China & While Some Try Wrapping Their Heads Around the New Type of Soft Serve, Others Are Definitely NOT 'Lovin It'!

McDonald's China has launched Spicy Chilli Oil Ice Cream Sundae and as the name clearly suggests it includes both chilli and oil. Yes, it is not your regular soft-serve that come with chocolate or strawberry sauce. It goes an extra mile with chilly and oil topping the dessert. 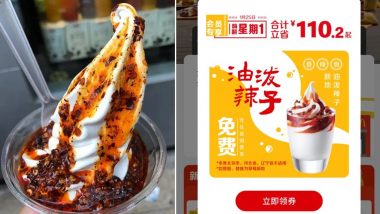 Heard of Spicy Chilli Oil Ice Cream Sundae launched by McDonald's China yet?  Just like the name clearly suggests it includes both chilli and oil. Yes, it is not your regular soft-serve that come with chocolate or strawberry sauce. It goes an extra mile with chilly and oil topping the dessert. It is being said that Mc Donald's earlier also came up with Oreo and spam burger with a mysterious white sauce in December 2020 and now the Chinese Mc Donald's lovers have Spicy chilli oil ice cream sundae to relish. In the past few years, the internet has seen the weirdest food combinations.

But this new delicacy from the fast-food giant has divided people. While some are trying to wrap their heads around this new form of soft-serve some are definitely NOT lovin' it!  It is found on its members-only "creative" menu which means only McDonald's China members can redeem for free with a coupon on Jan. 25 specifically. However, it is unavailable in regions like Beijing city, Hebei and Liaoning provinces. Oranges in Maggi Noodles? Picture of This Weird Food Combination is Wanting Netizens to Throw Up in Disgust!

The dessert is made up of a vanilla-flavoured soft-serve doused generously with Spicy chilli oil.  However, the concept of spicy or salty ice-cream isn't new. Many like the combination of Guava ice-cream with red chilli powder, very popular in India, whereas many love to devour salted (Himalayan salt) vanilla or chocolate ice-cream. However, it is the oil that is making eyeballs pop. Ice-cream with oil is something unheard of, BUT looks like it is not the case in China. A very common form of spicy ice-cream is said to be the chocolate Ice Cream with a hint of spice from chilli and cinnamon. This is one of the most popular ways of having chocolate ice-cream. This ice cream is said to give you both the warm as well cold sensation to your mouth. Do You Know Indori Pizza Comes With Sev as Topping? While Some Foodies Call it Crime, It's a Delicacy in Indore (Check Pics).

Since people in China use Weibo, users on the social media site cannot help but discuss the dessert. Well, just like Twitter, Weibo is said to be divided too with some loving the concept, some completely aghast! On Twitter, however, netizens have come up with mixed reactions. While some say the concept isn't new, others believe that Mc Donald's has copied the idea from local dessert places. "This is what ive been saying. this has been around for years and its really not as weird as people are making it out to be", wrote one user. Another Twitter user said, "Now I'm wondering whether the vanilla soft serve is the right base. There's a place in LA that does garlic ice cream...". Closer to home in India, remember when someone shared pictures of Kaju Katli soup online ? Well, at least this item is not getting as much hate.

Very few even liked the idea, like this one user who said, "Honestly looks dank. I'm not afraid of mixing the sweet and pungent. I'm a big fan of garlic ice cream so this makes sense to me." So yes, looks like fans of garlic ice-cream may like this delicacy launched by Mc Donald's China. What do you think?

(The above story first appeared on LatestLY on Jan 24, 2021 10:20 AM IST. For more news and updates on politics, world, sports, entertainment and lifestyle, log on to our website latestly.com).