Do You Know Indori Pizza Comes With Sev as Topping? While Some Foodies Call it Crime, It's a Delicacy in Indore (Check Pics) 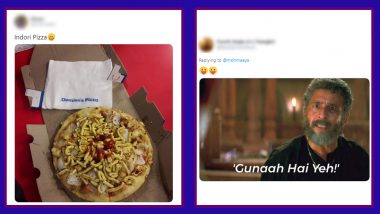 You may have seen a number of ridiculous food combinations that are shared on Twitter every now and then. Two of the most undesirable food items get paired together and netizens call out to people who try such experiments. Everyone loves pizza and while each one may have their favourite toppings to select from, be it veg or non-veg, do you know namkeen sev makes as a topping on Pizza in India? Available in Madhya Pradesh's Indore, it is called as Indori Pizza and it adds the popular Indian namkeen snack over the pizza. While you may find it weird and unthinkable there are quite a few people who love it! A Twitter user shared the picture of this Indori pizza and it is going viral. After Kaju Katli - Ketchup Combo, Gulab Jamun Pizza and Kurkure Milkshake by Desi Twitter Are Out to Ruin Your Foodgasm.

Twitter user Maaya (@mohmaaya) shared a picture of Dominos Indori Pizza on the feed. The pizza shows only thick sev over the veggies and some ketchup over it. At first glance, it doesn't look as appetising but looks like it is a very common preference for people in Indore. Sev is such a popular topping here, that when the pizza chain opened in here, people demanded the sev on pizza. In fact, the love for sev as a topping is seen on other snacks like sandwich and parathas too, says a report. Twitterati wasn't impressed by this Indori twist to the pizza. Gulab Jamun Pizza Is Going Viral on Twitter Leaving Disgusted Netizens Say, ‘Hey, Satan Called and He Wants His Dinner Back’ (Check Funny Memes and Jokes).

Check Some of the Reactions to This Pic:

Not everyone's impressed but looks like it is quite a thing. When we searched it on Instagram, we saw few pictures that do have sev has a topping on pizzas.

So it is a common delicacy in Indore we know by now. What do you think? Would you like some extra namkeen on top of your pizza? Then Indori Pizza should be on your list of food to try.

(The above story first appeared on LatestLY on Aug 15, 2020 04:10 PM IST. For more news and updates on politics, world, sports, entertainment and lifestyle, log on to our website latestly.com).