Ssscary Ride! Cobra Found Hissing Inside Handle of Scooty, Watch The Snake Rescue Video That Will Make Your Skin Crawl

Video of a cobra being rescued from the handle of a scooty has gone viral on social media platforms. People surrounding the area can be heard screaming as the cobra comes out of its hiding. 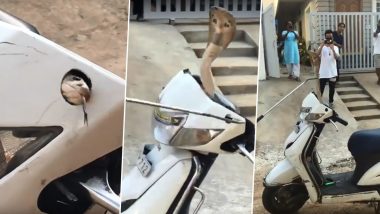 Video of a cobra being rescued from the handle of a scooty has gone viral on social media platforms. The clip shows the reptile hissing as it tries to come out of the light hole, but in vain. The person rescuing the cobra is then seen breaking the handle open. People surrounding the area can be heard screaming as the cobra comes out of its hiding. It is believed that the reptile can then taken to safety. Meanwhile, the video is being shared as WhatsApp forwards urging people to be careful with their vehicles in summer. Man Rescues King Cobra Stuck Inside Bike in Karnataka, TikTok Video Goes Viral.

Come summer and snakes look for a cool place to rest. Often they find solace inside parked vehicles. Snakes have also been found inside shoes, used shocks and loft cracks in the past. To avoid such incidents, one should avoid keeping vacant baseboard boxes outside homes which come becomes a great place for snakes and other reptiles.

Video of Snake Inside Handle of Scooty:

Multiple times in the past, videos of snakes found inside vehicles have gone viral in the past. Video of a cobra drinking water from a plastic bottle was shared widely in 2017. It was then said that due to the blistering heat of the summers, snakes come out of their holes in the look of water and cool place to rest. It is frightening how these snakes can easily slip into vehicles without notice.

(The above story first appeared on LatestLY on Mar 29, 2020 02:48 PM IST. For more news and updates on politics, world, sports, entertainment and lifestyle, log on to our website latestly.com).