While it is forbidden to carry any inflammable object on planes, this man sat back comfortably smoking his cigarette. 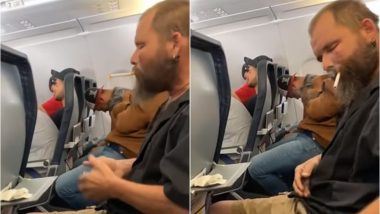 A video going viral on social media shows man smoking a cigarette on a plane. He can be seen lighting the smoke using a lighter and smoking as fellow passengers look on. The incident happened on a Minneapolis-bound Spirit Airlines flight at 8.30am on Tuesday. Wearing a dark polo and shorts, the middle-aged man can be seen smoking the cigarette as if it is a normal sight on flights. A woman sitting beside him captured the man's illegal act on the plane. While it is forbidden to carry any inflammable object on planes, this man can be seen making himself comfortable in his seat after taking a long drag. Drunk Woman Creates Chaos in Ukrainian Airline With Her Racist Rants, Hits Passengers, Video Goes Viral.

As the man sits in his seat with his eyes closed, a passenger who visibly looks worried by the man's act, gestures a plane attendant. The flight staff wakes up the man and takes his cigarette away. The woman who recorded the incident said that the man has been being noisy too. She said, "Throughout the flight, I could hear him making loud outbursts. Roughly 40 minutes before we landed, he laid across the two seats with his butt towards me. He continued his loud outbursts and began aggressively flipping the tray open and closed, then he sat up." Air New Zealand Kicks Out Female Passenger Who Refused to Heed Safety Instructions.

She further said, "I saw him take the cigarettes and lighter out of his pocket. I pulled out my phone and started to record as he lit the cigarette. The man across from us became nervous and flagged the attendant down as I recorded." The woman said that the flight attendant told the man, "You cannot smoke on airplanes. It's against the law, you do know that, right?" She added, "The attendant put the cigarette out on the tray and took his boarding pass. He didn't have any other issues, and when we landed, the airport police took him off the flight first." It is not known what happened to the man after the police took him away.

(The above story first appeared on LatestLY on May 24, 2019 08:43 PM IST. For more news and updates on politics, world, sports, entertainment and lifestyle, log on to our website latestly.com).