Thailand Woman Finds Lump of Whale Vomit Worth Over $2,50,000 Near Her Beach House

A 49-year-old woman in Thailand recently found a lump of whale vomit near her house along the beach in Nakhon Si Thammarat province. 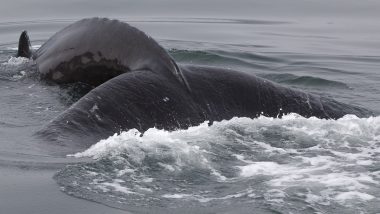 Bangkok, March 3: A 49-year-old woman in Thailand recently found a lump of whale vomit near her house along the beach in Nakhon Si Thammarat province. She was shocked to know that the whale vomit was worth almost £190,000 or more than $2,50,000. According to reports, Siriporn Niamrin was taking a walk along the beach after a rainstorm when she noticed a large mass washed up on the shore. However, she did not realize it was worth millions. Blue Whale Weighing 100,000 Kg Spotted off Sydney Coast for the Third Time in 100 Years, Viral Pic of Rare Sighting of the Largest Animal on Earth Will Make You Go Woah!.

Siriporn went close to the mask and noticed it smelled like fish. Thinking she would get some money, she dragged the mass her home. She called neighbours for her help. When they saw the mass, they understood what it was. Siriporn was shocked to be told the substance was whale vomit, known as ambergris, reports said. Ambergris is a rare ingredient used in the perfume industry. Do You Remember Tahlequah the Killer Whale That Carried Dead Calf for 17 Days? She Is Pregnant Again! (See Pictures).

To check if the find was really high-value whale vomit, Siriporn along with neighbours held a naked flame to the 12 inches wide and 24 inches long mass, causing a part of it to melt and then harden again after cooling down. She is waiting for experts to visit her house. "I feel lucky to have found such a large piece. I hope it will bring me money. I'm keeping it safe in my house and I have asked the local council to visit to check it," she told The Daily Mail.

Ambergris, produced by sperm whales, has a foul smell but after it dries out, it produces a sweet and long-lasting fragrance. Therefore, it is a sought-after ingredient for perfume makers.

(The above story first appeared on LatestLY on Mar 03, 2021 12:01 PM IST. For more news and updates on politics, world, sports, entertainment and lifestyle, log on to our website latestly.com).