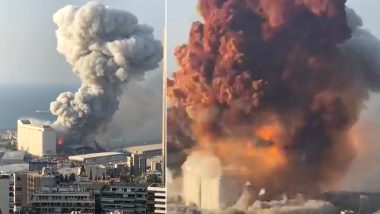 Beirut, August 5: A massive blast rocked Lebanon's capital Beirut on Tuesday. At least 100 people were reported to have lost their lives in the explosion, while over 4,000 people sustained injuries. Governor of Beirut Marwan Abboud said that the blast caused damage more than $3 billion. Abboud added that the blast damage extended over half of the city. According to the Beirut governor, around 3 lakh people left homeless due to the blast. Beirut Explosion Update: 2,750 Tonnes of Ammonium Nitrate Exploded At the Port

Lebanese Prime Minister Hassan Diab has urged his country's allies to help Lebanon overcome the repercussions of the disastrous explosions. Meanwhile, Diab declared Wednesday a national mourning day for the victims of the explosions. Lebanese President Michel Aoun called for an emergency meeting of the Higher Defence Council to discuss the reasons and repercussions of the explosions. Beirut Blasts: PM Narendra Modi 'Shocked And Saddened' by Explosions That Killed Over 70 in Lebanese Capital.

According to a report published in CNN, France will send two military planes and 15 tons of equipment to Lebanon. The aid package reportedly includes two military planes, 55 personnel, 15 tons of equipment and a mobile clinic. The causes of the blasts remained unknown, but Lebanese Interior Minister Mohammad Fahmi said that the explosive chemicals stored at Port of Beirut might have caused the explosions.

The blast was so powerful that it could be heard 240km (150 miles) away on the island of Cyprus in the eastern Mediterranean. The explosion was reported hours before a UN tribunal was scheduled to deliver verdict in the assassination of ex-Prime Minister Rafik Hariri.

(The above story first appeared on LatestLY on Aug 05, 2020 04:03 PM IST. For more news and updates on politics, world, sports, entertainment and lifestyle, log on to our website latestly.com).