These Hardik Pandya Funny Memes and Jokes From India vs New Zealand 2019 ODI Series Will Make You Go ROFL!

The cricketer shone brightly in today's match, having scored 45 runs off 22 balls, which included 5 sixes and 2 straight up boundaries. 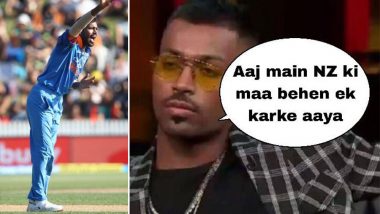 There is no forgiving cricketer Hardik Pandya for his Koffee With Karan stint, where he irked one and all with his sexist, misogynistic and degrading comments. And while nobody wanted to actually hear about the cricketer’s off-field conquests, we all did and were not at all pleased. The controversy surrounding the episode also featuring K L Rahul, erupted to humungous proportions, so much so that Hotstar pulled it off its site and both Hardik Pandya and K L Rahul faced a ban. Hardik Pandya and KL Rahul Tender Unconditional Apology After Sexist Remarks on Koffee With Karan 6

There was also a huge debate on whether or not cricketers should grace shows that have nothing to do with cricket. However, both the cricketers were lucky enough to be let off after a strict warning by BCCI and ever since, have been focusing on their performance at the on-going India V/S New Zealand ODI series. Hardik Pandya – KL Rahul Fiasco: COA Lifts Ban on Cricketers With Immediate Effect, May Get Chance to Play in T20Is Against New Zealand

The fifth match that is happening today, started off on a dim note with most of India’s prized batsmen getting dismissed. However, it was Hardik Pandya’s game that saved face. Sunil Gavaskar Hails Hardik Pandya’s Comeback, Says the All-Rounder Adds Balance to the Team

However, his efforts only encouraged memes and jokes on the cricketer, which we have to admit, were extremely hilarious, all thanks to the Koffee With Karan references. See some of them below.

This is how Hardik Pandya was seeing the ball.#NZvIND pic.twitter.com/FsDmGroW9r

This one is on his famous 'Mai Karke Aaya' dialogue:

There is a Lagaan reference also:

this is what Hardik Pandya saw in New Zealand bowlers. #NZvIND #KWK pic.twitter.com/nMimI0HZlj

This one will really crack you up:

There were also a few others who came out in support of the cricketer:

As far as @hardikpandya7 knows his responsibility on ground, I think no other factors should finish him!

After all the critism from netizens; @hardikpandya7 bounced back!

Let ur work speak; while u keep ur mouth shut! #INDvsNZ #HardikPandya

There were also reports of how Koffee With Karan would cease to return with its next season owing to the controversies. The episode, Karan Johar and K L Rahul, who were not saying much, but giggling to Hardik Pandya's comments, were also subject to extreme amounts of backlash. Karan Johar, in particular, was at the receiving end where many felt that as the host and the maker of the show, Karan had the power to stop Hardik and limit his obnoxious comments, but he did not, for the sake of viewership.

(The above story first appeared on LatestLY on Feb 03, 2019 01:11 PM IST. For more news and updates on politics, world, sports, entertainment and lifestyle, log on to our website latestly.com).