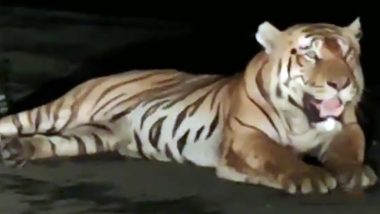 A tiger was seen sitting in the middle of a flyover in Madhya Pradesh bringing traffic to a halt. The shocking video was captured on camera by one of the eyewitnesses who were waiting for the wild animal to clear the road. According to reports, the incident occurred on National Highway 7, which marks the buffer zone of Pench National Park located about 25 kms away from Seoni district. The video of the incident has gone viral on social media platforms. The clip was posted on Twitter with the caption which can be translated from Hindi to read, "In Seoni district, when the kings of the forest came on the road and started roaring!" After Black Panther in Kabini Forests, Rare Golden Tiger From Assam's Kaziranga National Park Stuns The Internet (View Pic)

Some construction work was going on in the area, when the tiger appeared from the woods and sat in the middle of the road. The tiger can be seen sitting on the road tired from its walk. The wild cat could be seen panting while laying on the road. It was a nail-biting scene for people who were waiting worrying what if the tiger decides to attack them. Fortunately, the tiger did not harm anyone or attack any vehicle. One of the eyewitnesses reportedly said that it also tried to jump off the flyover to escape, but could not, so it sat on the road for some time and later walked away.

Thereafter, eyewitnesses informed the forest department and police who arrive on the scene. After sitting on the road for some time, the time walking away back into the woods on its own. Meanwhile, the video of tiger sighting has been widely shared on the internet.

(The above story first appeared on LatestLY on Jul 14, 2020 04:02 PM IST. For more news and updates on politics, world, sports, entertainment and lifestyle, log on to our website latestly.com).