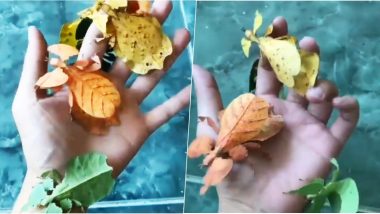 “Nature holds the key to our aesthetic, intellectual, cognitive and even spiritual satisfaction,” says American biologist, EO Wilson. And some of the gifts by mother nature is no less than a wonder, which is why everyone insists on reconnecting with nature. Because who knows what natural wonder you may come across. Take, for example, this viral video showcasing colourful leaf insects. A Twitter user with the handle, Nature is LitFire @NaturelsLit shared a short clip of few leaf insects crawling over his palm. It got netizens excited, with one them commenting, “Imagine eating a salad and one of these just start moving.” While some found it cool, some found them bizarre, and for some, these leaf insects looked scary. But what are these leaf insects? Cicadas Seen in US First Time in 17 Years! Know If They Are Dangerous And Everything About These Periodical Insects 'Wailing Like Aliens'.

According to Britannica, “Leaf insect, (family Phylliidae), also called walking leaf, any of more than 50 species of flat, usually green insects (order Phasmida, or Phasmatodea) that are known for their striking leaflike appearance. Leaf insects feed on plants and typically inhabit densely vegetated areas. Their natural range extends from islands in the Indian Ocean, across parts of mainland South Asia and Southeast Asia, to Papua New Guinea and Australia in the western Pacific.” Now, that we kind of know about these cool creatures, let us check out a few more interesting facts about them.

So, that was quite some information about these nature’s delightful creatures. We are completely bowled over our little many-legged creepy-crawly friends. Unlike other bugs, they don’t scare the bejesus out of us.

(The above story first appeared on LatestLY on May 28, 2020 08:17 PM IST. For more news and updates on politics, world, sports, entertainment and lifestyle, log on to our website latestly.com).