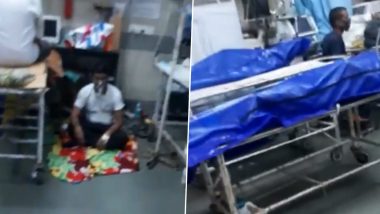 Mumbai, May 11: Bharatiya Janata Party (BJP) leader Nitesh Rane on Monday shared a video purportedly recorded inside a COVID-19 ward at BMC-run KEM hospital in Mumbai. The video showed body bags lying near patients inside the ward. Some patients can be seen sitting or lying on the floor of the ward as all beds are occupied. Sharing the video, Nitesh Rane said the BMC was normalising sighting of dead bodies. Video Shows Dead Bodies Lying Beside Living Patients in Sion Hospital, BMC Orders Probe.

KEM hospital today at 7 am! I think the @mybmc wants us to get used to seeing dead bodies around us while taking treatment bcz they just don’t want to improve! Feel bad for the health workers too who hv to work in such conditions!! Is there any hope (sic)," Rane tweeted. Reacting to the video, Shiv Sena lawmaker Anil Desai said maximum care is being taken for the safety of patients inside hospitals. Mumbai: Video Shows Overcrowded Ward Inside KEM Hospital, Two Patients Kept on One Bed. "If any such video (KEM Hospital) is viral on social media then it might have happened at that very moment but corrective measures would have been taken immediately. All officials are working efficiently. No need to defame anyone," Desi told ANI. Rane had earlier shared a video, allegedly taken inside a COVID-19 ward at the civic-run Sion hospital, showing dead bodies of patients lying next to those who are under treatment.

After the video emerged, the Brihanmumbai Municipal Corporation (BMC) ordered an inquiry and removed hospital Dean Pramod Ingle from his post. Another clip showing an overcrowded ward at KEM hospital has also surfaced on social media platforms.

(The above story first appeared on LatestLY on May 11, 2020 01:17 PM IST. For more news and updates on politics, world, sports, entertainment and lifestyle, log on to our website latestly.com).