Viral Video of Real Lions Watching ‘Escape Lion Drill’ With a Man in Furry Suit at Tobe Zoo of Ehime in Japan Becomes Butt of All Jokes on Twitter! 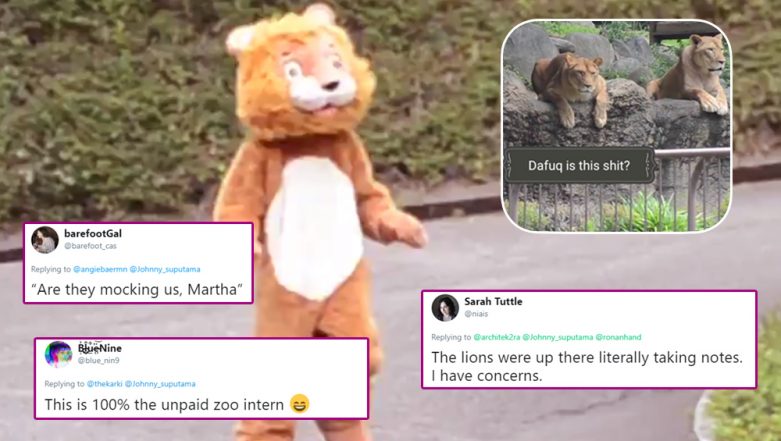 Viral video of Japan Zoo having 'Escaped lion drill' with a man in furry suit while real lions watch has Twitter in splits with funny reactions (Photo Credits: Twitter)

Here we are to brighten up your weekend with a video going viral on the internet, making Twitter trip on laughter! This video of a man clad in a furry lion suit as a part of an on-point "Lion Escape Training" is making people laugh their lungs out! The video clip from Tobe Zoo in Ehima where the Zoo authority can be seen working together on an elaborate escaped-lion drill, in no time became fodder for Twitter to create humour. In the video of the drill you can see the crew using air guns, net and men in cars trying to capture yet another man in a furry lion-costume running around(because they can obviously not have a real lion for the drill), however at the end, you can see the video capture the reactions of real lions, for whom this drill is actually taking place. This shot gives a complete twist to the serious video.

Take a look at the video shared by a Twitter user who goes by the handle name Spoon & Tamago, @Johnny_suputama:

Note the expression on the actual lions faces.

He initially mentioned the zoo's name as Tobe Zoo in Aichi which he later changed to Tobe Zoo in Ehima. While the video itself is somewhat funny, it is the reactions received by the video that is winning the internet.

Here are the funniest reactions:

Actual lions:”Yeah, that will work.”

“Are they mocking us, Martha”

Don't even get me started!

Should I be scared?

The lions were up there literally taking notes. I have concerns.

Lion leader: "So we jump at the people holding the net, trap them under their own net, and keep going. Any questions?"

Lion 1: you seeing this shit?

Such viral videos sometimes become food for Twitter to express their humorous side and we ain't complaining! A Twitter user who has experience working in a zoo at the end clarified that such drills actually happen and they are hilarious. He said, "I worked in a zoo and can confirm they do these drills like this 😂 one time they did a rhino drill and very slowly drove a golf cart around with a rhino label on it LMAO."