WandaVision is trending on social media and the reason behind this is ofcourse that it's been loved by fans across. Helmed by Matt Shakman, the series along with garnering positive reviews online is also churning funny memes and jokes. Check it out. 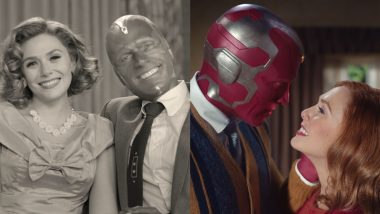 WandaVision is trending on social media and the reason behind this is ofcourse that it's been loved by fans across. Helmed by Matt Shakman, WandaVision's two episodes started streaming on the Disney+ Hotstar Premium from January 15, 2021. The much-awaited Marvel series stars Elizabeth Olsen, Teyonah Parris, Kathryn Hahn, Paul Bettany, Kat Dennings, and Randall Park in pivotal roles. While the show has been receiving positive reviews for its content, meme makers, on the other, are busy churning funny jokes online. WandaVision Review: A Terrific Elizabeth Olsen Owns The Show in Marvel Cinematic Universe’s Weirdest Offering Since Doctor Strange (LatestLY Exclusive).

Just a scroll through the micro-blogging site Twitter and you will find tonnes of memes. From bringing Aamir Khan's Ghajini character into the picture, mentioning about the commercials to some ROFL video meme, we bet you cannot miss these gems. WandaVision features Wanda Maximoff (Elizabeth Olsen) and Vision (Paul Bettany) who are staying a pleasant life in a classic comedy show reality until they sense a problem. Here, check out some memes below.WandaVision Trailer: Did You Notice This Captain Marvel Character in the First Promo of MCU's Disney+ Hotstar Series?

Me trying to understand where the story is leading#WandaVision pic.twitter.com/IKOuqhETYG

Wake me up when episode 3 of #WandaVision drops... pic.twitter.com/6vudWYt2ok

Wanda in both episodes Vs when she sees beekeeper

Episode 2 got me fucked up. Like when Wanda saw the beekeeper and said “No.” I already knew that i’d be experiencing more sadness as the episodes come out. Wanda really doesn’t want to wake up from HER reality because she just can’t accept the truth. pic.twitter.com/I24UC5y9mn

One For The Commercials!

Me watching the commercials in #WandaVision: pic.twitter.com/RRnsSpEPWP

So, which one from the above meme is your favourite? Do tell us in the comments below. FYI, WandaVision in India is not yet available in Hindi, Tamil, or Telugu.

We at LatestLY also reviewed the first two episodes of the series, "Definitely MCU's weirdest offering after Doctor Strange, WandaVision can be considered as one of the franchise boldest attempts at storytelling, helped by the freedom the small screen offers. While it is still early to call the experiment a success, WandaVision is boosted by Olsen and Bettany's enthusiastic performances and its enjoyable tributes to sitcom tropes," writes the author. Stay tuned!

(The above story first appeared on LatestLY on Jan 15, 2021 09:15 PM IST. For more news and updates on politics, world, sports, entertainment and lifestyle, log on to our website latestly.com).