Pakistan blocked social media platforms on Friday, April 16, 2021, for four hours. Twitter was at what it does best—creating funny memes. WhatsApp memes and jokes soon went viral as the Facebook-owned app is back in the country. 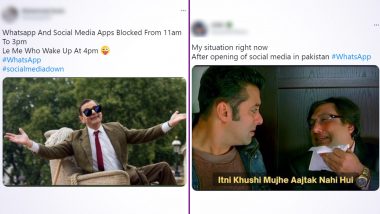 What is life without social media? Pretty difficult, right? We are so much indulged in online platforms that even a brief glitch can make our world turn upside down. Pakistan blocked social media platforms on Friday, April 16, 2021, for four hours. Soon, as the ban was lifted, netizens were quick to rush on Twitter to share their reactions. Twitter was at what it does best—creating funny memes. WhatsApp memes and jokes soon went viral as the Facebook-owned app is back following a four-hour ban in Pakistan. From switching to VPN to Hera Pheri meme templates and more, netizens LOL hard at these hilarious posts.

According to reports, the Pakistan government suspended social media platforms' services, including WhatsApp, to stop their use to organize possible demonstrations following violent protests. Facebook, Twitter, Instagram, WhatsApp, and TikTok were inaccessible across the country for four hours, from 11:00 am to 3:00 pm. Soon after the suspension ended, more than checking the social media notifications, netizens were more interested in sharing funny memes and jokes. Twitter is flooded with hilarious posts online, displaying the many emotions that users may have gone through while the social media platforms were blocked.

Nibba nibbi after getting no reply for 3 hours in whatsapp.#WhatsApp pic.twitter.com/tkx2zaq7tS

After opening of social media in pakistan #WhatsApp pic.twitter.com/rS9MKN5bqc

When you are the only one On whatsapp 😂😂✨ !! #socialmedia #WhatsApp #Pakistan pic.twitter.com/gnjdQn2TNn

Whatsapp And Social Media Apps Blocked From 11am To 3pm

Le Me Who Wake Up At 4pm 😜 #WhatsApp #socialmediadown pic.twitter.com/LIYTRd1azs

You Know That Look!

Me who woke up at 3pm: pic.twitter.com/1LDT7bG8wP

Aren’t they hilarious? As of now, internet platforms, including WhatsApp, is accessible in the country. While the reason behind the suspension could be serious, Twitterati’s light-hearted approach has surely spread joy.

(The above story first appeared on LatestLY on Apr 16, 2021 06:45 PM IST. For more news and updates on politics, world, sports, entertainment and lifestyle, log on to our website latestly.com).