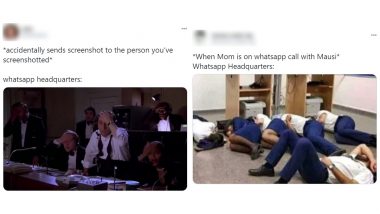 WhatsApp's privacy policy update has set the internet buzzing about one's data security online. When WhatsApp sent an in-app notification a couple of weeks ago about sharing user's data with Facebook, it sparked concerns about user data. A lot of people already ditched the popular messaging app and switched to Telegram and Signal. And while WhatsApp is doing all that it can to revive its users, including latest status message, people cannot stop with the funny memes. The messaging app has been a target of several memes and jokes in the past few days. One of them include jokes on WhatsApp headquarters, taking a dig at the officials snooping in on people's conversations. A lot of funny memes and jokes on WhatsApp Headquarters are trending online.

The Facebook-owned app has been trying to convince people, even answering the many doubts people have on their new privacy policy. However, users do not seem convinced and have already migrated to Signal, an alternative which has also been taking a dig at WhatsApp on social media. So as WhatsApp continues to explain that its privacy policy update is not as intrusive, the memes on it continue. Funny memes and jokes on WhatsApp Headquarters reacting to people's conversations are trending on Twitter. Telegram 'Pays Tribute' to WhatsApp's New Privacy Policy Using Coffin Dance Viral Meme, Messaging App Takes on Its Rival in the Funniest Way (Check Tweets).

She : we need to talk

*When Mom is on whatsapp call with Mausi*

guy in whatsapp headquarters waiting for people to message me: pic.twitter.com/07dpGoYHIi

She: thank u so much babu

Now more than the privacy concerns, people seem to be really enjoying this meme game online. Forwarding the memes about WhatsApp on WhatsApp. What's your take on this one? Or are you too just enjoying these memes?

(The above story first appeared on LatestLY on Jan 17, 2021 12:56 PM IST. For more news and updates on politics, world, sports, entertainment and lifestyle, log on to our website latestly.com).