Woman Who Pretends like a Puppy for Her TikTok and OnlyFans Subscribers Earns a Six-Figure Salary Serving 'Kinky' & 'Uncensored' Content Online! (Watch Videos) 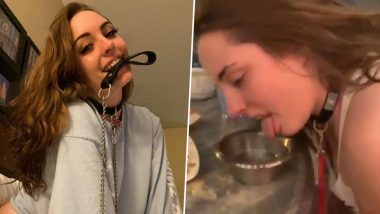 Being an influencer only became a legit career option in the past decade or two. And while there exist various types of influencers this particular one is probably the weirdest. A 21-yea-old who says she "feels like a puppy" earns money in six figures by acting like a dog and making videos of it. The videos range from being cute to NSFW depending on the price that has been paid to her. Yes. It may seem bizarre to you but Jenna Phillips is following her passion and that is acting like a dog.  Some of her videos are also sexual in nature and with "kinky" and "uncensored" content on her TikTok and OnlyFans subscribers. The former optician makes videos and does things that a puppy would like playing fetch, chasing and rolling on the floor. Her fans pay her almost about 1000 dollars to act like a puppy. The influencer now has over 1,20,000 followers on TikTok. popular OnlyFans page.

Jenna goes by the username ‘yourpuppygirljenna’ and the Austin Texas says that she has a strong connection to the animals, saying that she has always felt "like a dog" and liked being called a good girl.  Jenna Phillips charges around $20 a month to see her uncensored content but they may increase if people want videos of more sexual nature. She said: "There has been a big surge in my followers since I moved to doing puppy play content.The majority of the puppy community is for gay men. Whenever I went shopping for the gear, it was only really for men," to LadBible.

Some of her fans even pay over $1,000 for a video and Jeanna says, "I feel like a dog. I just want to roll around, play fetch, get head scratches, run around and play. All of that.I have always acted like a puppy, but not in a sexual way at first. I used to pretend I was a puppy when I was growing up. I really love praise. I love hearing 'good girl'. It makes my heart melt every time". Take a look at some of Jenna, the puppy girl's videos acting like a puppy:

i’m getting a new dog bed today 🥳 what color should it be? pic.twitter.com/Bet98T67yU

repost hehe forgot to add my tag 🐶 my owner said he is taking me on a walk when he gets back if i’m good 🥳 pic.twitter.com/whGxdGNE2W

I got a treat today 🐶💗 pic.twitter.com/A3o49kDDdF

Jenna will be making such bizarre and kinky videos as her full-time job that has increased her income 100 times since. Jenna seems to enjoy her job where she creates content for her OnlyFans and TikTok family. She says that the charges of her videos increase with the sexual nature of her videos.

(The above story first appeared on LatestLY on Jul 16, 2020 09:12 AM IST. For more news and updates on politics, world, sports, entertainment and lifestyle, log on to our website latestly.com).