World Elephant Day 2020: From Throwing Tantrums to Playing With Birds, Cute And Funny Videos of Baby Elephants Will Make You Love These Tuskers Even More! 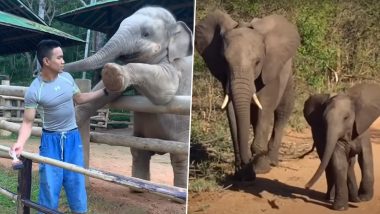 World Elephant Day is observed on August 12 annually to create awareness about elephants. The day is to highlight the issues faced by elephants and to find ways to protect them. Elephants are the biggest animals on land and are simply beautiful. Their size and habits are something that will leave anyone amazed and so are their little ones. Baby elephants are a delight to watch and videos of these creatures giving a tough time to everyone including their mothers or caretakers have gone viral multiple times in the past. But, one cannot ignore their cuteness and playful nature. Especially with those big ears and small trunk, little elephants are a little too adorable to watch. So, on World Elephant Day 2020, we bring to you some cute videos of elephants that will leave you laughing. World Elephant Day 2020 Date And Significance: Know The History of the Day That Celebrates the Magnificent Creatures.

You would have often seen baby elephants doing mischief. From tumbling down buckets of water to running after birds, they are curious about everything about often go behind a lot of things. They are also very loving, especially towards their caretakers. They will cuddle you by simply lying all over you. Watch some of the best baby elephant videos and share them on World Elephant Day. When Elephants Saved Humans! These Moving Instances of Jumbos’ Bravery Rescuing People From Tragic Situations Will Inspire You to Become Better Person! (Watch Videos)

Be it humans or elephants, babies are the same everywhere and so are the mothers. The videos show the mother patiently sitting as the little one is all over the place.

This is the funniest video of a baby elephant so far on the internet. It shows the calf throwing a tantrum and not ready to list to the mother. But, sooner it realises that the nobody is paying attention to its tantrums, it returns with the herd.

This cute video will make you feel there is no better friend than an elephant. It shows a man painting a fence, when a baby elephant begins to nudge him. Seem the little jumbo wants the man to play with him.

Videos of baby elephants playing in water simply cannot be ignored. Also, once they get into water tubs, it is difficult to get them out of it.

Baby elephants love their caretakers like anything. There are a hundred videos of them cuddling and not letting them go.

Have you ever seen an elephant dancing? To everyone out there wondering what that was, here a little one has decided to bless you with some performance. Try hard not to laugh!

World Elephant Day was conceived in 2011 by Canadian filmmakers Patricia Sims and Michael Clark of Canazwest Pictures, and Sivaporn Dardarananda, Secretary-General of the Elephant Reintroduction Foundation in Thailand. The day was officially founded, supported and launched by Patricia Sims and the Elephant Reintroduction Foundation. The first International Elephant Day was held on August 12, 2012. This World Elephant Day 2020, let's try to protect these jumbos and conserve their habitat.

(The above story first appeared on LatestLY on Aug 11, 2020 08:00 PM IST. For more news and updates on politics, world, sports, entertainment and lifestyle, log on to our website latestly.com).