May 9 marks the celebration of World Migratory Bird Day 2020. Every year the second Saturday in the month of May marks this observance by the UN. The day is organized to increase awareness and build conversations about migratory birds from around the world. On this day, we look at some of the migratory birds that come to India every year. 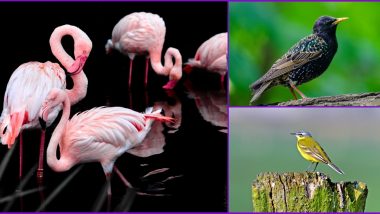 May 9 marks the celebration of World Migratory Bird Day 2020. Every year the second Saturday in the month of May marks this observance by the UN. The day is organized to increase awareness and build conversations about migratory birds from around the world. It also touches upon the wider concern of bird habitat and its conservation. Bird conservation is a global issue. So people across the world celebrate World Migratory Bird Day by organising discussions, awareness programs and events. On this day, we look at some of the migratory birds that come to India every year. Secretarybird 'World's Sexiest Bird' From Africa is Killer, But Not Just by its Looks.

Every year's celebration of World Migratory Bird Day has a theme to it. The theme for this year's celebration is "Birds Connect Our World." This theme concentrates on how the migration routes of many birds cross the national borders. This day is an UN-led campaign aiming to raise awareness of migratory birds and the importance of international cooperation to conserve them. As per the official site, this time a lot of virtual talks and a wave of social interactions dedicated to migratory birds are expected to take place in many countries on the day.

Greater flamingoes are the first ones that come to mind when we think of migratory birds in India. These pink coloured birds are the state of Gujarat and descend from the Rann of Kutch to come to Mumbai and Navi Mumbai. This year, as the country is in lockdown, a record number of flamingoes have been spotted in these regions.

This bird looks a lot like a sparrow but as the name suggests, it has a blue patch on its neck. The bird is native of Europe and during the extreme winters, it is known to come across Indian borders. It is mostly seen in the state of Rajasthan.

The yellow wagtail is one of the visitors to India in the winter season. It is a common resident in the milder parts of western Europe. It migrates to South Asia and Africa. In India, it is seen in the marshy regions. These yellow-coloured birds have cheerful calls and are seen flying among the cattle.

This bird is a category of ducks which are distributed in Iceland, North England and Northern Europe. They are grey in colour with a rusty colour and buffy head. During the winters they move to Southern Europe and also observed in the Indian subcontinent. During the end of the year, which is the early start of winter in India, these ducks can be seen around biodiversity parks and sanctuaries.

These medium-sized birds are known for their quick adaptations to different environments. Hence they are found in most biogeographic regions of the world. They can stay in the wild as well as among humans. They are commonly spotted in North Indian regions during the winter season.

Ospreys look much like hawks, white and brown in colour. These birds breed in the North American region and migrate to Central and South America. This bird is also called as Seahawk as it survives on fish. In India, they are found in the at Kaziranga national park and northeastern parts of India.

These are some of the birds that can be seen in India among many other migratory avians that come across in the Indian subcontinent. Most of these birds are observed during the winter months in the country.

(The above story first appeared on LatestLY on May 09, 2020 08:00 AM IST. For more news and updates on politics, world, sports, entertainment and lifestyle, log on to our website latestly.com).