The Do-Dodonpa is the fastest-accelerating roller coaster in the world and was built in the year 2001. Popular for its "super death" speed, the ride reaches at a speed of 112mph in 1.56 seconds. 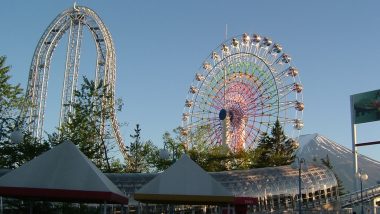 Tokyo, August 24: The Do-Dodonpa roller coaster, regarded as one of the major attractions at the Fuji-Q Highland amusement park in Japan, has been suspended after people complained of having serious bone injuries after the ride. It has been reported that four riders have broken their bones after taking a ride at the Do-Dodonpa roller coaster. Some of these riders have also broken their back and neck because of this ride.

The Do-Dodonpa is the fastest-accelerating roller coaster in the world and was built in the year 2001. Popular for its "super death" speed, the ride reaches at a speed of 112mph in 1.56 seconds. The park stated that the ride has been suspended after reports of injuries, adding that the cause of the injury and its connection with the machine have not been confirmed as of now.

No technical issues were found during the initial investigation, however it is assumed that the issue would be with the ride’s rapid acceleration at its peak which is three times more the force of gravity. It has been reported that the ride needs the riders to lean back against their seat and over the shoulder keeping them in a position with little space between back and the backrest.

Similar injuries had been reported in the past during May and July and the park had suspended the service in order to inspect the ride. However, no abnormalities were found then.

(The above story first appeared on LatestLY on Aug 24, 2021 02:02 PM IST. For more news and updates on politics, world, sports, entertainment and lifestyle, log on to our website latestly.com).