HS Prannoy will represent India in the upcoming 2022 BWF World Tour Finals. Find out all the details regarding the broadcast and live streaming of the tournament in India. 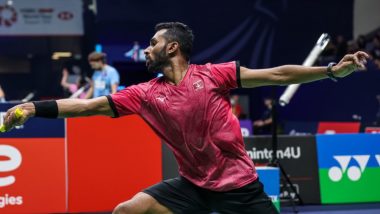 India will be represented by none other than HS Prannoy. The India shuttler has been in great form off late. He was instrumental in India's Thomas Cup victory, earlier in the year. Prannoy finished third in the 2022 BWF World Tour and qualified directly for the finals. According to the recent draw, the Indian shuttler has been grouped alongside defending champion Viktor Axelsen, Japan's Kodai Naraoka and China's Lu Guangzu. Prannoy will start his journey tomorrow December 7th against Japanese shuttler Kodai Naraoka. The Indian then will face Lu Guangzu of China before taking on Viktor Axelsen in the final match of the group stage.

The all-awaited 2022 BWF World Tour Finals will start on December 07 2022 in Bangkok, Thailand. The broadcasting rights in India for the 2022 BWF World Tour Finals are with Viacom 18 network. So all the matches from the major event will be broadcast live on Sports 18 and Sports 18 HD. Meanwhile, you can also watch the live streaming of the tournament on JioCinema and Voot.

(The above story first appeared on LatestLY on Dec 06, 2022 03:02 PM IST. For more news and updates on politics, world, sports, entertainment and lifestyle, log on to our website latestly.com).