Hamilton, the local hero would look to avoid defeat after losing the sprint race on Saturday while his rival, Red Bull's Max Verstappen would walk into this race with a 33-point advantage. Here are the live streaming details of the main race. 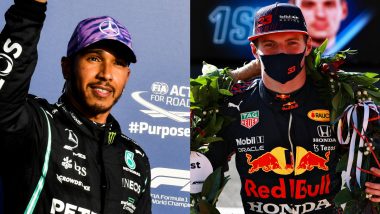 Lewis Hamilton, a seven-time world champion would compete against Dutch rival Max Verstappen in the British Grand Prix main race on July 18, Sunday. The race would take place at the Silverstone Circuit in Northamptonshire, England and is scheduled to start at 7:30 PM IST (Indian Standard Time). Verstappen grabbed the pole position for the race by winning the sprint race a day ago and having a 33-point advantage. The sprint race system was introduced by the Formula 1, starting with the British Grand Prix 2021 whereas the winner would have the pole position for the main competition. Max Verstappen Wins First Ever F1 Sprint Race, Takes British GP Pole

But the local favourite, despite losing the sprint race, has said that he would give his best performance on Sunday. "I need everyone to bring their energy again tomorrow and I’ll come with my A-game," Hamilton said. His fans and the whole country in fact would want Hamilton to secure the 99th win of his career. But the point advantage can work in favour of Verstappen. Here are the live streaming details for the race.

Where To Watch Live Telecast Of British GP 2021, F1 Main Race on TV?

Star Sports Network are the official broadcasters of F1 races in India and will be streaming the Styrian GP race live on its channels. Fans can tune into Star Sports Select 2 SD/HD channels to watch the live telecast of Monaco GP 2021.

Those unable to watch the F1 race on TV can turn to online platforms. Disney+ Hotstar, the official OTT platform of Star Sports will provide the Monaco GP 2021 live streaming for its fans in India. So fans can tune into the Disney+ Hotstar app and website to watch the race online.

(The above story first appeared on LatestLY on Jul 18, 2021 06:33 PM IST. For more news and updates on politics, world, sports, entertainment and lifestyle, log on to our website latestly.com).