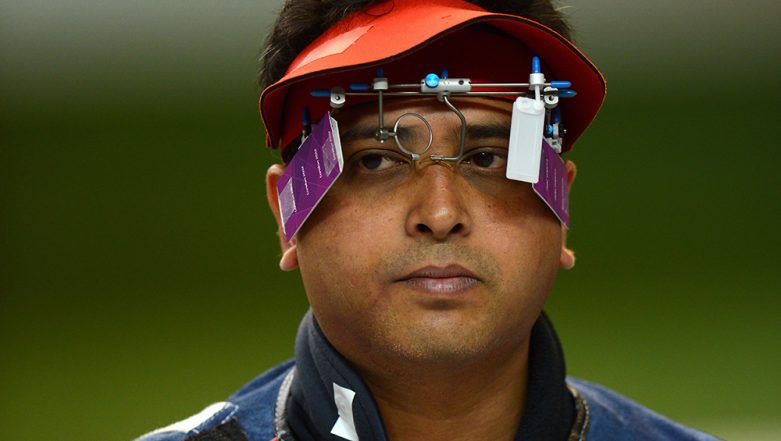 Kolkata, July 30: While not supporting India's proposed boycott, shooter Joydeep Karmakar on Tuesday said a strong protest from the entire sports fraternity is needed with even the Prime Minister intervening, to make sure such decisions like dropping shooting is not made in the future. Karmakar, who missed a podium finish by half a point in the 50m rifle prone at the 2012 London Olympics, lauded the Indian Olympic Association (IOA) for their strong protest, saying the "heartbreaking" decision has also not gone down well with his protege Mehuli Ghosh who is a bright prospect for the country. India Could Boycott 2022 Birmingham Commonwealth Games After Shooting Dropped As a Sport, Reveals IOA Chief Narinder Batra

"Being a shooter and a part of the shooting fraternity, it is of course very disappointing. Not only India, shooting as a discipline has done well and has a rich history at the Commonwealth Games," Karmakar told IANS. "I think the Prime Minister should also intervene. It is against the Olympic policy but this is for a good reason. India's stand is not against anybody. It is to make it greater, to augment it, to add to it. We are not harming anybody.

"It is not interference in terms of any procedure but for the sport, I feel if from the Prime Minister's office there is some kind of intervention, I would be happy," Karmakar said."As an athlete, I would want others to take part. So a complete boycott won't be fair to all athletes. But I am very happy that the IOA has taken such a strong stand for shooting. The sport was neglected. There should be a strong protest because I don't see any reason for shooting to be left out," he said.

Karmakar, who is talented junior shooter Mehui's long-time coach, also informed that the 18-year old has been constantly asking him on what grounds was shooting left out of the 2022 CWG where she would have been a prospective medal hope for India after winning silver last time in the women's 10m air rifle event with a perfect final shot of 10.9.

"I have spoken to her at a personal level about it. I told her that you won silver last time, you would be 22 by the 2022 CWG comes calling. She will miss a chance. She was of course upset and angry. She kept on asking me why they are doing like this. It came as a natural reaction." Karmakar also urged Abhinav Bindra, India's only individual Olympic gold medallist, to take a more active role in the protest.

Bindra, last week, said boycotting is not an option, and advised the IOA to "load" the CWG committees with more of their people so that, in future, shooting is not excluded from the games. "He is talking of a global repercussion. That I agree with but partially. He should not only talk or tweet about it, he should come up. He is a global leader. He should take a more active role. It can make a difference as he is an extremely talented and knowledgeable person. He takes right stands."

The Commonwealth Games Federation (CGF) is expected to meet Indian officials to try and talk them out of their boycott plans. IOA President Narinder Batra had sent a mail to Sports Minister Kiren Rijiju and made it clear that discussions on these lines have been had informally by IOA members.

While expressing hope that there is still time to overturn the decision, Karmkar suggested India lobby with other smaller nations who do well in shooting and strengthen their case."There is still time. We still have two and half years to go. I am still hopeful (that the decision would be reversed). It has to be a strong and sustained protest. "There are smaller countries in the CWG who have shooters as their flagbearers. India should lobby with them and push the issue," he added. Indian shooters bagged 16 of their 66 medals, including seven gold, at last year's Gold Coast CWG Games where they finished third in the medals tally.